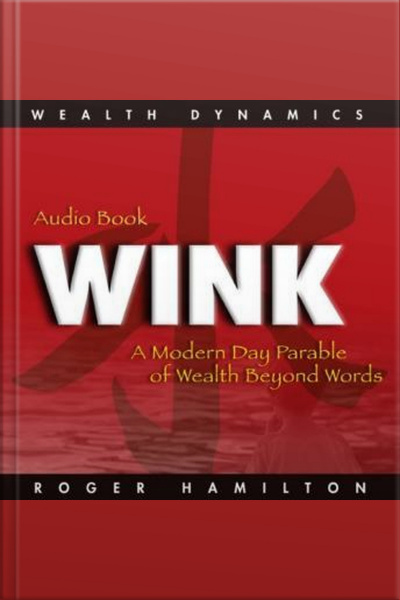 Wink and Grow Rich, Part 2 A Modern Day Parable of Wealth Beyond Words

Wink and Grow Rich is the fable about a boy being raised by his carpenter father, who is both sick and tired. In fact, he is tired of being sick and sick of being tired. Every day for the last 20 years the carpenter has visited the Well of Wealth and spent a dollar, because it is generally accepted by the townsfolk that if they give generously to the Well, it will in turn give generously to them. On this day, the carpenter is so ill that he is unable to visit the Well, so he entrusts his nine-year-old son, Richard, with a crumpled but treasured dollar and sends him in his place.

Along the way, Richard discovers that the Well of Wealth is not where he thought it would be, so he follows a different, more overgrown path, on which he meets an old woman, an optometrist, a plumber, a gardener, a fisherman, a rower, a musician, and an innkeeper. These intriguing and mysterious characters act as guides for Richard and share their wisdom. They have all built their wealth in very different ways, yet there is something about each that is common to all.

The story is intended to make the listener think more deeply about the dynamics of wealth creation. The keys to wealth are contained in the story behind the story, the lesson behind the lesson. To find these keys, the listener needs to become better at "seeing"—a philosophy the author sums up as, "What you see is always what you get."