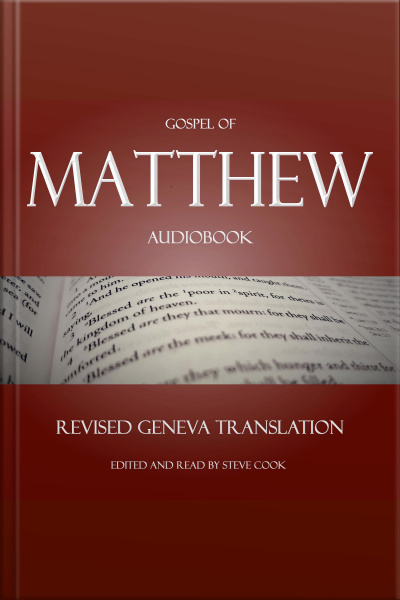 Draw closer to God with the Revised Geneva Translation of The Holy Bible (audiobook performed by 6-time #1 Amazon Best-Selling Narrator, Steve Cook), a faithful 21st Century update of the very first widely-distributed Bible in English, the Geneva Bible of the 1500's.
The RGT is one of only a handful of modern translations to be based on the same text the Reformers used. And as with all Scripture translated prior to the American Civil War, The Geneva Bible was specifically designed to be SPOKEN and HEARD (because a large percentage of antebellum believers were illiterate). So, in other words, the RGT is the text of Luther, Tyndale and Calvin, faithfully revised and updated to be heard and spoken by the modern believer. (Matthew 7:24, Luke 8:21)
In scholarly terms, the RGT is a formal or complete equivalency, based on the Byzantine text-type family of manuscripts. Most other modern translations, including the NASB, ESV, NIV, and NLT, use the shorter Alexandrian text-type family of manuscripts as their base text, which, in addition to excluding passages such as Mark 16:9-20, John 7:53-8:11, and the “Johannine Comma” of 1John 5:7-8, also contains hundreds of other undocumented omissions and variations from the text of the Reformation – such as Matthew 17:21, Matthew 18:11, Matthew 23:14, Mark 7:16, Mark 11:26, John 5:4, John 6:47, Acts 8:37, Acts 9:5b-6a, Acts 15:24b, and Colossians 1:14.
It is our hope that this project will be a living and active Bible for this generation, built for hearing and doing (Matthew 7:24), and that it will be profitable for teaching, convicting, correcting, and instructing in righteousness (2Timothy 3:16)…
“…that your faith might not be in the wisdom of men, but in the power of God.” ~1Corinthians 2:5