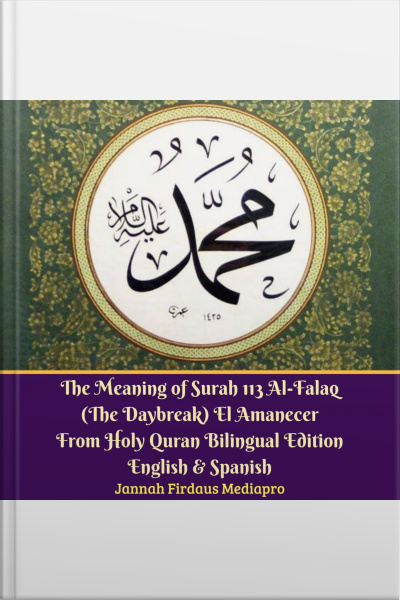 The Meaning of Surah 113 Al-Falaq (The Daybreak) El Amanecer From Holy Quran (Sagrado Corán) Bilingual Edition In English & Spanish Languange.
Surah al-Falaq (The Daybreak") is the 113th surah of the Qur'an. It is a brief five verse invocation, asking Allah SWT (God) for protection from the evil of Satan. This surah and the 114th (and last) surah in the Qur'an, an-Nas, are collectively referred to as al-Mu'awwidhatayn "the Refuges", as both begin "I seek refuge", an-Nas tells to seek God refuge from the evil from within, while al-Falaq tells to seek God refuge from the evil from outside, so reading both of them would protect a person from his own mischief and the mischief of others.
The word "al-Falaq" in the first verse, a generic term referring to the process of 'splitting', has been restricted in most translations to one particular type of splitting, namely 'daybreak' or 'dawn'. Verse 4 refers to one of soothsayer techniques to partially tie a knot, utter a curse and spit into the knot and pull it tight. In the pre-Islamic period, soothsayers claimed the power to cause various illnesses. According to soothsayers the knot had to be found and untied before the curse could be lifted. This practice is condemned in verse 4.