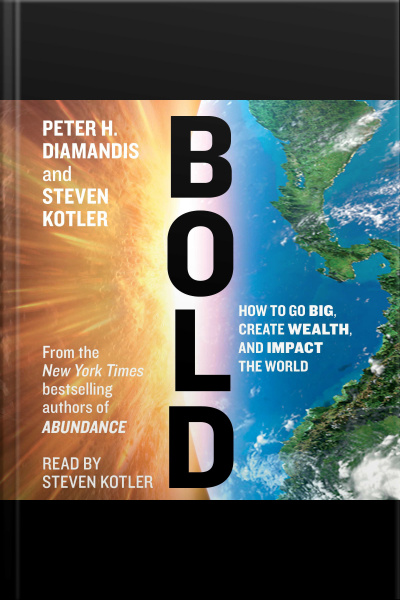 Bold: How To Go Big, Create Wealth And Impact The World

Birth of a Behemoth


The year was 1878. George Eastman was a twenty-four-year-old junior clerk at the Rochester Savings Bank in need of a vacation. He chose to go to Santo Domingo, in the Dominican Republic. At the suggestion of a coworker, Eastman bought all the requisite photographic equipment to make a record of the trip. It was a lot of equipment: a camera as big as a Rottweiler, a massive tripod, a jug of water, a heavy plateholder, the plates themselves, glass tanks, an assortment of chemicals, and, of course, a large tent—this last item providing a dark place in which to spread emulsion on the plates before exposure and a dark place to develop them afterwards. Eastman never did go on that vacation.1

Instead, he got obsessed with chemistry. Back then photography was a “wet” art, but Eastman, who craved a more portable process, read about gelatin emulsions capable of remaining light-sensitive after drying. Working at night, in his mother’s kitchen, he began to experiment with his own varieties. A natural-born tinkerer, Eastman took less than two years to invent both a dry plate formula and a machine that fabricated dry plates. The Eastman Dry Plate Company was born.

More tinkering followed. In 1884, Eastman invented roll film; four years later he came up with a camera capable of taking advantage of that roll. In 1888, that camera became commercially available, later marketed under the slogan “You press the button, we do the rest.”2 The Eastman Dry Plate Company had become the Eastman Company, but that name wasn’t quite catchy enough. Eastman wanted something stickier, something that people would remember and talk about. One of his favorite letters was K. In 1892, the Eastman Kodak Company was born.

In those early years, if you would have asked George Eastman about Kodak’s business model, he would have said the company was somewhere between a chemical supply house and a dry goods purveyor (if dry plates can be considered dry goods). But that changed quickly. “The idea gradually dawned on me,” Eastman said, “that what we were doing was not merely making dry plates, but that we started out to make photography an everyday affair.”3 Or, as Eastman later rephrased it, he wanted to make photography “as convenient as a pencil.”

And for the next hundred years, Eastman Kodak did just that.


Steven Sasson is a tall man with a lantern jaw. In 1973, he was a freshly minted graduate of the Rensselaer Polytechnic Institute. His degree in electrical engineering led to a job with Kodak’s Apparatus Division research lab, where, a few months into his employment, Sasson’s supervisor, Gareth Lloyd, approached him with a “small” request. Fairchild Semiconductor had just invented the first “charge-coupled device” (or CCD)—an easy way to move an electronic charge around a transistor—and Kodak needed to know if these devices could be used for imaging.4 Could they ever.

By 1975, working with a small team of talented technicians, Sasson used CCDs to create the world’s first digital still camera and digital recording device. Looking, as Fast Company once explained, “like a ’70s Polaroid crossed with a Speak-and-Spell,”5 the camera was the size of a toaster, weighed in at 8.5 pounds, had a resolution of 0.01 megapixel, and took up to thirty black-and-white digital images—a number chosen because it fell between twenty-four and thirty-six and was thus in alignment with the exposures available in Kodak’s roll film. It also stored shots on the only permanent storage device available back then—a cassette tape. Still, it was an astounding achievement and an incredible learning experience.

“When you demonstrate such a system,” Sasson later said, “that is, taking pictures without film and showing them on an electronic screen without printing them on paper, inside a company like Kodak in 1976, you have to get ready for a lot of questions. I thought people would ask me questions about the technology: How’d you do this? How’d you make that work? I didn’t get any of that. They asked me when it was going to be ready for prime time? When is it going to be realistic to use this? Why would anybody want to look at their pictures on an electronic screen?”6

In 1996, twenty years after this meeting took place, Kodak had 140,000 employees and a $28 billion market cap. They were effectively a category monopoly. In the United States, they controlled 90 percent of the film market and 85 percent of the camera market.7 But they had forgotten their business model. Kodak had started out in the chemistry and paper goods business, for sure, but they came to dominance by being in the convenience business.

Even that doesn’t go far enough. There is still the question of what exactly Kodak was making more convenient. Was it just photography? Not even close. Photography was simply the medium of expression—but what was being expressed? The “Kodak Moment,” of course—our desire to document our lives, to capture the fleeting, to record the ephemeral. Kodak was in the business of recording memories. And what made recording memories more convenient than a digital camera?

But that wasn’t how the Kodak Corporation of the late twentieth century saw it. They thought that the digital camera would undercut their chemical business and photographic paper business, essentially forcing the company into competing against itself. So they buried the technology. Nor did the executives understand how a low-resolution 0.01 megapixel image camera could hop on an exponential growth curve and eventually provide high-resolution images. So they ignored it. Instead of using their weighty position to corner the market, they were instead cornered by the market.


Back in 1976, when Steven Sasson first demonstrated the digital camera at Kodak, he was immediately asked for a ready-for-prime-time estimate. How long, frightened executives wanted to know, until his new invention posed a serious threat to the company’s market dominance? Fifteen to twenty years, Sasson said.8

In arriving at this answer, Sasson made a quick estimation and did a quick calculation. He estimated the number of megapixels that would satisfy an average consumer at two million. Then, in order to figure out the time it would take for these two million megapixels to become commercially available, Sasson relied on Moore’s law for his calculation—and that’s where the trouble started.

In 1965, Gordon Moore, the founder of Intel, noticed the number of integrated circuits on a transistor had been doubling every twelve to twenty-four months. The trend had been going on for about a decade and, Moore predicted, would probably last for another.9 About this last part, he was off by a bit. All told, Moore’s law has held steady for nearly sixty years. This relentless progress in price and performance is the reason the smartphone in your pocket is a thousand times faster and million times cheaper than a supercomputer from the 1970s. It is exponential growth in action.

Unlike the +1 progression of linear growth, wherein 1 becomes 2 becomes 3 becomes 4 and so forth, exponential growth is a compound doubling: 1 becomes 2 becomes 4 becomes 8 and so on. And this is the problem: This doubling is unusually deceptive. If I take 30 large linear steps (say three feet, or one meter per step) from my Santa Monica living room, I end up 30 meters away, or roughly across the street. If, alternatively, I take 30 exponential steps from the same starting point, I end up a billion meters away, or orbiting the Earth 26 times. And this was exactly where Kodak went wrong—they underestimated the power of exponentials.


Underestimating the power of exponentials is easy to do. We hominids evolved in a world that was local and linear. Back then, life was local because everything in our forebears’ lives was usually within a day’s walk. If something happened on the other side of the planet, we knew nothing about it. Life was also linear, meaning nothing changed over centuries or even millennia. In stark contrast, today we live in a world that is global and exponential. The problem is that our brains—and thus our perceptual capabilities—were never designed to process at either this scale or this speed. Our linear mind literally cannot grok exponential progression.

But if the goal is to avoid Kodak’s errors (if you’re a company) or to exploit Kodak’s errors (if you’re an entrepreneur), then you need to have a better understanding of how this change unfolds—and that means understanding the hallmark characteristics of exponentials. To teach these, I have developed a framework called the Six Ds of Exponentials: digitalization, deception, disruption, demonetization, dematerialization, and democratization. These Six Ds are a chain reaction of technological progression, a road map of rapid development that always leads to enormous upheaval and opportunity.

Digitalization. This idea starts with the fact that culture makes progress cumulative. Innovation occurs as humans share and exchange ideas. I build on your idea; you build on mine. This type of exchange was slow in the early days of our species (when all we had as a means of transmission was storytelling around the campfire), picked up with the printing press, then exploded with the digital representation, storage, and exchange of ideas made possible by computers. Anything that could be digitized—that is, represented by ones and zeros—could spread at the speed of light (or at least the speed of the Internet) and became free to reproduce and share. Moreover, this spreading followed a consistent pattern: an exponential growth curve. In Kodak’s case, once the memory business went from a physical process (that is to say, imaged on film, stored on paper) to a digital process (imaged and stored as ones and zeros), its growth rate became entirely predictable. It was now on an exponential curve.

Of course, it’s not just Kodak. Anything that becomes digitized (biology, medicine, manufacturing, and so forth) hops on Moore’s law of increasing computational power. Show more