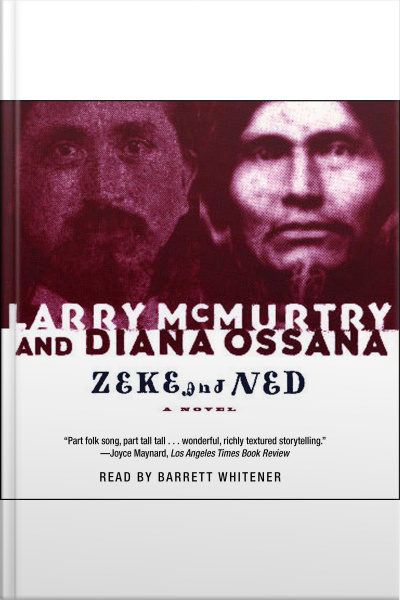 In Zeke and Ned, Larry McMurtry and Diana Ossana have created an American masterpiece: funny, exuberant, compelling, violent, and tragic.
Set in the Cherokee Nation not Jong after the Civil War, Zeke and Ned is the story of Ezekiel Proctor and Ned Christie, the last Cherokee warriors, living men whose story is not merely legend, but history -- their fates a consequence of the brutal policies which produced the Trail of Tears. As a child, Zeke Proctor walked the Trail of Tears from Georgia to the Indian Territory west of Arkansas, acquiring through that bitter struggle a fierce loyalty to the Cherokee way. Though a family man and a respected member of the Cherokee Senate, Zeke the man is an adventurous charmer, with a family roving eye.
Ned Christie is tall and charismatic, with waist-length hair and a high-cheekboned handsomeness, that appeals to women all over the Going Snake District. But Ned's heart is set on one woman: Jewel Sixkiller Proctor, Zeke's beautiful young daughter. And Ned's long and determined resistance to the relentless pressure of white law unwittingly makes him a hero to the Cherokee people.
Zeke and Ned is a powerful, affecting work dramatizing the long Cherokee struggle against white authority. It is, ultimately, a moving tale about love, honour, loyalty, heroism, and the human condition.