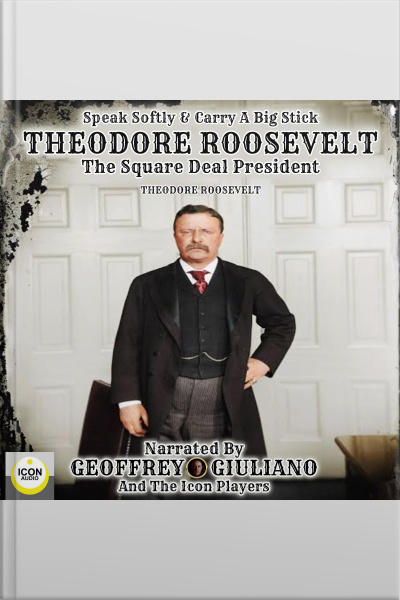 Theodore Roosevelt Jr., often referred to as Teddy Roosevelt was an American statesman, politician, conservationist, naturalist, and writer, who served as the 26th president of the United States from 1901 to 1909. He previously served as 33rd governor of New York from 1899 to 1900 and the 25th vice president of the United States from March to September 1901. Roosevelt emerged as a leader of the Republican Party and became a driving force for the anti-trust policy while supporting Progressive Era policies in the early 20th century. His face is depicted on Mount Rushmore alongside George Washington, Thomas Jefferson, and Abraham Lincoln. These are his finest thoughts in his own words.
Mixing/Mastering by Devin Lawrence
Edited by Macc Kay
Production executive Avalon Giuliano
ICON Intern Eden Giuliano
Music By AudioNautix With Their Kind Permission
©2020 Eden Garret Giuliano (P) Eden Garret Giuliano
Geoffrey Giuliano is the author of over thirty internationally bestselling biographies, including the London Sunday Times bestseller Blackbird: The Life and Times of Paul McCartney and Dark Horse: The Private Life of George Harrison. He can be heard on the Westwood One Radio Network and has written and produced over seven hundred original spoken-word albums and video documentaries on various aspects of popular culture. He is also a well known movie actor.