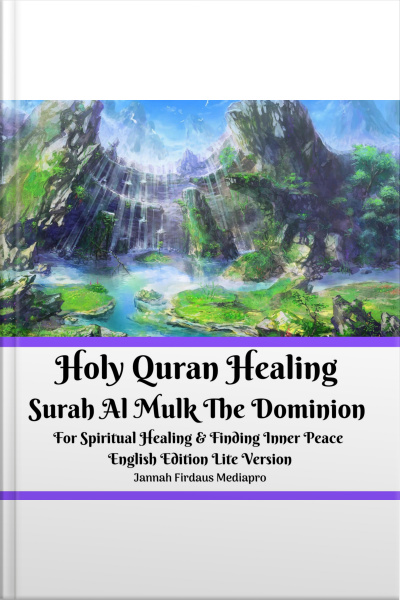 Holy Quran Healing Surah Al Mulk The Dominion For Spiritual Healing & Finding Inner Peace English Edition Lite Version Audiobook
Surah Al-Mulk (meaning 'The Sovereignty') is the 67th chapter (Surah) of the Quran. Surah Al-Mulk has 30 verses (Ayat). Surah Al-Mulk is a Meccan Surah, a Surah that was revealed to Prophet Muhmmad ? in Mecca. Like any other Surah in the Quran, Surah Al-Mulk is very important. There are many virtues from reciting this Surah.
The Virtues of Reciting Surah Al-Mulk
Abu Hurairah (May Allah be pleased with him) reported:
I heard the Messenger of Allah (?) saying, "There is a Surah in the Qur'an which contains thirty Ayat which kept interceding for a man until his sins are forgiven. This Surah is 'Blessed is He in Whose Hand is the dominion.' (Surat Al-Mulk 67)." [At-Tirmidhi and Abu Dawud]
So as we can see from the Hadith above, Surah Al-Mulk will intercede for its reciter (the person who recites it often) on the Day of Judgement until its reciter is forgiven by Allah (SWT).
Yahya related to me from Malik from Ibn Shihab that Humayd ibn Abd ar-Rahman ibn Awf had told him that Surat al-Ikhlas (Surah 112) was equal to a third of the Qur'an, and that Surah al-Mulk (Surah 67) pleaded for its owner. [Muwatta Malik]
Narrated Ibn 'Abbas: "One of the Companions of the Prophet (?) put up a tent upon a grave without knowing that it was a grave. When he realized that is was a person's grave, he recited Surat Al-Mulk until its completion. Then he went to the Prophet (?) and said: 'O Messenger of Allah (?) [Indeed] I erected my tent without realizing that it was upon a grave. So when I realized there was a person in it I recited Surat Al-Mulk until its completion.' So the Prophet (?) said: "It (Surah Al-Mulk) is a prevention, it is a salvation delivering from the punishment of the grave.'" [Tirmidhi]
Based off the Hadith above, Surah Al-Mulk is also a prevention, and salvation delivering from the punishment of the grave.