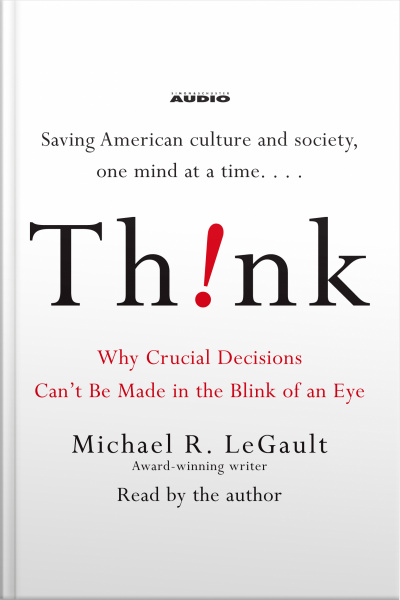 Think!: Why Crucial Decisions Can't Be Made In The Blink Of An Eye [abridged]

This isn't the time to Blink. It's time to THINK! -- before it's too late.

Outraged by the downward spiral of American intellect and culture, Michael R. LeGault offers the flip side of Malcolm Gladwell's bestselling phenomenon, Blink, which celebrated impulse thinking over factual knowledge or critical analysis. If bestselling books are advising us to not think, LeGault argues, it comes as no surprise that sharp, incisive reasoning is on the decline, leading our society to incompetence and failure.

• Permissive parenting and low standards that have caused an academic crisis among our children -- body weights rise while grades plummet
• A culture of image and instant gratification, fed by reality shows and computer games, that has rendered curiosity of the mind and spirit all but obsolete
• Stress, aversion to taking risks, and therapy that are replacing the traditional American "can do" mind-set

Far from perpetuating the stereotype of the complacent American, LeGault maintains that Americans are abundantly gifted with the ability to fulfill our nation's greatest potential starting today but we need smart teachers, health care workers, sales representatives, students, mechanics, and leaders to make it happen. A bracing wake-up call to America, THINK! delivers a no-holds-barred prescription for reversing the erosion of American civilization.