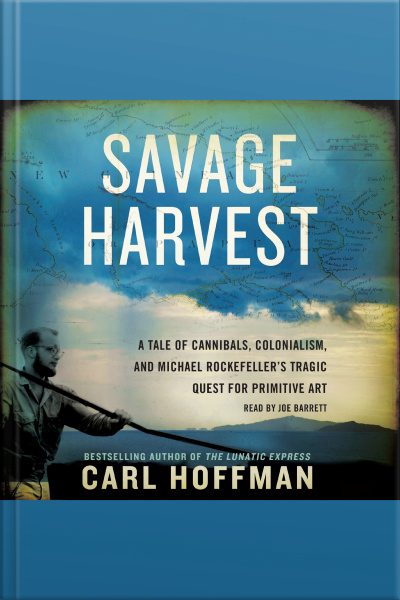 On November 21, 1961, Michael C. Rockefeller, the twenty-three-year-old son of New York governor Nelson Rockefeller, vanished off the coast of southwest New Guinea when his catamaran capsized while crossing a turbulent river mouth. He was on an expedition to collect art for the Museum of Primitive Art, which his father had founded in 1957, and his expedition partner—who stayed with the boat and was later rescued—shared Michael's final words as he swam for help: "I think I can make it."

Despite exhaustive searches by air, ground, and sea, no trace of Michael was ever found. Soon after his disappearance, rumors surfaced that he'd made it to shore, where he was then killed and eaten by the local Asmat—a native tribe of warriors whose complex culture was built around sacred, reciprocal violence, headhunting, and ritual cannibalism. The Dutch government and the Rockefeller family vehemently denied the story, and Michael's death was officially ruled a drowning.

While the cause of death was accepted publicly, doubts lingered and sensational stories circulated, fueling speculation and intrigue for decades. The real story has long waited to be told—until now.

Retracing Michael's steps, award-winning journalist Carl Hoffman traveled to the jungles of New Guinea, immersing himself in a world of former headhunters and cannibals, secret spirits and customs, and getting to know generations of Asmat. Through exhaustive archival research, he uncovered hundreds of pages of never-before-seen original documents and located witnesses willing to speak publicly for the first time in fifty years.

In Savage Harvest Hoffman finally solves this decades-old mystery and illuminates a culture transformed by years of colonial rule, whose people continue to be shaped by ancient customs and lore. Combining history, art, colonialism, adventure, and ethnography, Savage Harvest is at once a mesmerizing whodunit and a fascinating portrait of the clash between two civilizations that resulted in the death of one of America's richest and most powerful scions.