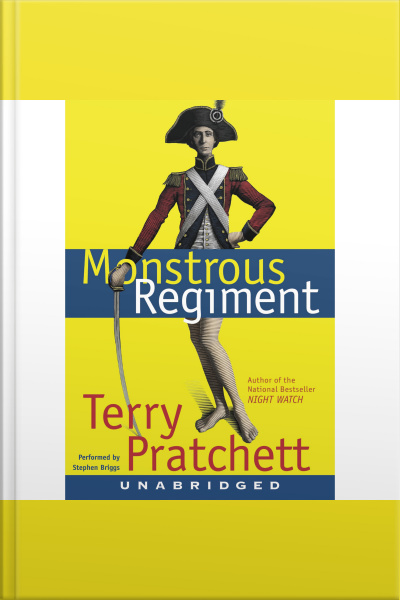 War has come to Discworld…again.

And, to no one's great surprise, the conflict centers around the small, insufferably arrogant, strictly fundamentalist duchy of Borogravia, which has long prided itself on its ability to beat up on its neighbors. This time, however, it's Borogravia that's getting its long-overdue comeuppance, which has left the country severely drained of young men.

Ever since her brother Paul marched off to battle a year ago, Polly Perks has been running The Duchess, her family's inn -- even though the revered national deity, Nuggan, has decreed that female ownership of a business is an Abomination. To keep The Duchess in the family, Polly must find her missing sibling. So she cuts off her hair, dons masculine garb, and sets out to join him in this man's army.

Polly is afraid that someone will see through her disguise; a fear that proves groundless when the legendary Sergeant Jackrum accepts her without question. Or perhaps the sergeant is too desperate to discriminate -- which would explain why a vampire, a troll, a zombie, a religious fanatic, and two uncommonly close "friends” are also eagerly welcomed into the fighting fold. Soon, Polly finds herself wondering about the myriad peculiarities of her new brothers-in-arms. It would appear that Polly "Ozzer” Perks is not the only grunt with a secret.