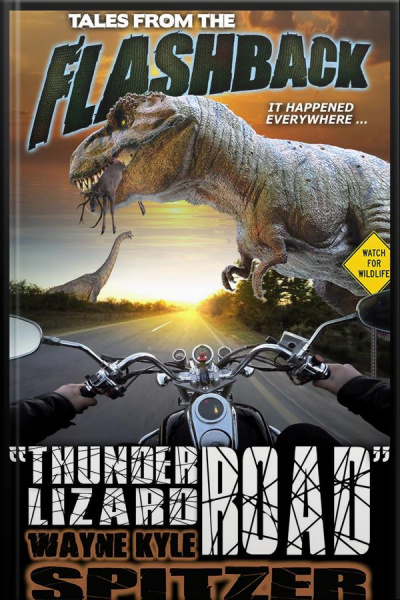 “Wow,” said Annie, her arms tightening around his waist. “Are you feeling it too?”

He focused on a dark shape hovering just above the wheat—several dark shapes—like hummingbirds, but big. Something glinted blue-black in the sun. “What do you mean?”

“The mescaline … I’m still tripping, baby.” Her inner thighs constricted against his hips and he thought of the fantastic shag they’d shared in California—while standing doggie-style amidst the Vasquez Rocks, the famed location of so many westerns—and found the fact that she was hallucinating also reassuring, even if it did mean they were barreling down the Interstate at 74 mph while still under the influence. “Yeah. Me too. I’m going to pull over at the next rest stop until it passes.”

“DJ is expecting us at five. And it isn’t polite to keep the head of a motorcycle gang waiting. They’re my friends, Sammi. This is important to me.”

“Not if we take too long at the rest stop … Jesus, I’m seeing dinosaurs back here. What the hell did Jackie give us?”

Her voice had dropped a couple octaves and the wind and engine noise were making it difficult to hear her. Not gave, he thought, a little resentfully. Sold. And the money’s starting to run out. “Say again?”

“Dude, I’m literally seeing dinosaurs. There’s, like, a T-Rex back there. Trying to eat a tractor.” She laughed.

He turned and looked over his shoulder, saw the tyrannosaur brushing its massive head against the cab of the combine, attempting to roll it over. There’s no way we can be seeing the same thing. There’s just no way except—

He spun around in time to see a blue-black thing, an insect, a dragonfly, which was at least as long as his forearm, hovering directly in their path—before it smashed against the windshield like a rock and splattered like a cantaloupe, hurling watery green blood and guts everywhere, some of which landed in Sammi’s mouth. And then they were careening out of control in the general direction of the gravel shoulder, and while he didn’t experience anything so dramatic as his life flashing before him, he did revisit, in a kind of time-out from time itself, the months since he’d received the Lotto payout and met Annie—a fast-living spitfire who was 29 to his 39 and whom he had nothing in common with beyond how well they got on sexually—and recognized in himself an increasing dissatisfaction with, well, all of it—the gambling, the drugs, the sex—everything. But then the time-out was over and they were laying on their side near the edge of the road—yet still in it—as the 18-wheeler bore down upon them, close enough so that Sammi could see the driver’s face, and thus knew the driver had noticed them too late.