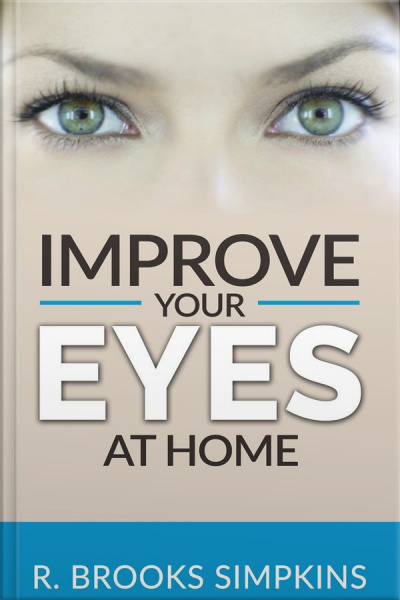 Improve Your Eyes At Home

There is not any mystery about the eyes when you are told something about them. I have endeavoured to write this little book in a manner resembling a fireside chat. There are not any diagrams, and neither are there any technical terms other than to call some parts of the eyes by their actual names. It has not been easy to portray rather complicated knowledge in simple words—but I hope that my readers will find my descriptions easy to read, and helpful also. In those days, after enjoying normally good sight as a boy, I had become very shortsighted - and intensely disliked having to wear glasses.

Gradually over the years the urge developed to investigate the true reason for my having to do so - and I recalled that when, as an early teenager, I rebelled against the decision of an eminent ophthalmic surgeon to prescribe my first pair of glasses, he generously admitted to me that much was not yet known about the eyes. The urge to become an independent research worker grew, and eventually became so strong that I cast all else aside to respond to its beckoning. My authority for writing what I have written in the pages that follow is not supported by conventional diplomas of qualification—but instead it is provided by more than thirty years' experience employing new approaches to affections of the eyes, and defective vision, and applying advanced methods of remedial treatment to the eyes of children, and men and women of all ages.