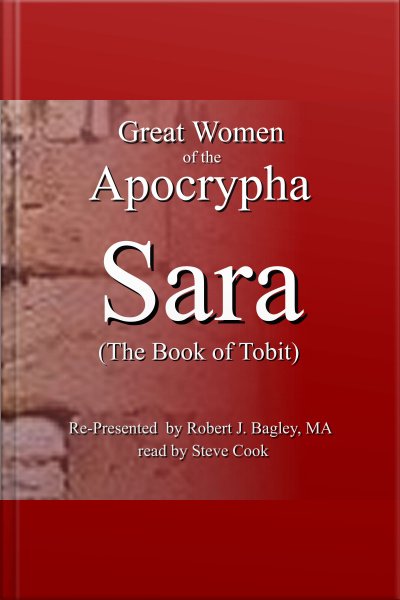 Great Women Of The Apocrypha: Sara (the Book Of Tobit)

Read for you by Best-Selling Narrator, Steve Cook, Sara is found in the Book of Tobit in the Apocrypha. So as not to confuse; this is not Abraham’s wife from the book of Genesis.
Sara is miserable because of numerous marital misfortunes and she eventually prays to God that he would let her die. Her story is intertwined with that of Tobit, a righteous man who lived in Nineveh (a town many miles away) near the time of Jonah, the biblical Prophet. Tobit, for reasons of his own, also prays to God to allow him to die at the very same time Sara does.
The intertwining of these two stories is reinforced by the fact that almost immediately after Sara ends her prayer, the book mysteriously changes in tense from 1st person (Tobit) to the 3rd person. In addition, the Archangel Raphael is sent to minister to both Tobit and Sara at the end of Chapter 3. Thus, it seems “another voice” quite literally has taken over the story at the beginning of Chapter 4.
Sara’s faithful prayers and obedience to God brought her blessings beyond anything she could have ever imagined.
In modern times, the Apocrypha has only been excluded from the Old Testament in some Protestant publications. The idea that these books are forbidden is viewed both as myth and fact by many Christian scholars, with the reasonable course left in the midst of divided opinion being to study and understand these books. Jesus himself is said to reference texts from the Apocrypha using the Old Testament language which was familiar to those he was teaching.
It is also interesting to note that the Apostolic Fathers of the Early Church referenced the Apocrypha, and quoted from it as they did the Old Testament. It was hard not to do so, as the Jewish Old Testament included the Apocrypha.