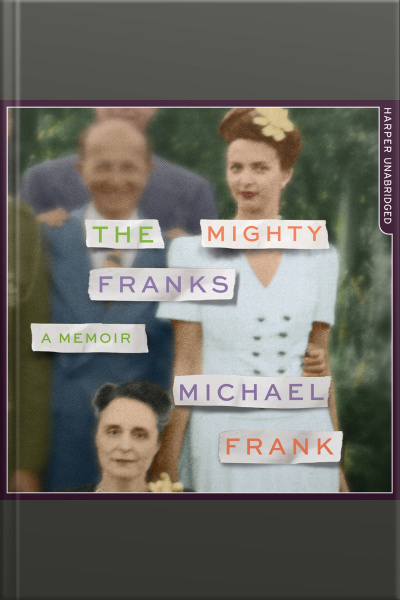 The Mighty Franks A Memoir

A story at once extremely strange and entirely familiar – about families, innocence, art and love. This hugely enjoyable, totally unforgettable memoir is a classic in the making.

My aunt called our two families the Mighty Franks. But, she said, you and I, Lovey, are a thing apart. The two of us have pulled our wagons up to a secret campsite. We know how lucky we are. We’re the most fortunate people in the world to have found each other, isn’t it so?’

Michael Frank’s upbringing was unusual to say the least. His aunt was his father’s sister and his uncle his mother’s brother. The two couples lived blocks apart in the hills of LA, with both grandmothers in an apartment together nearby.

Most unusual of all was his aunt, Hankie’: a beauty with violet eyelids and leaves fastened in her hair, a woman who thought that conformity was death, a Hollywood screenwriter spinning seductive fantasies. With no children of her own, Hankie took a particular shine to Michael, taking him on Antiquing excursions, telling him about the very last drop of her innermost self’, holding him in her orbit in unpredictable ways. This love complicated the delicate balance of the wider family and changed Michael’s life forever.