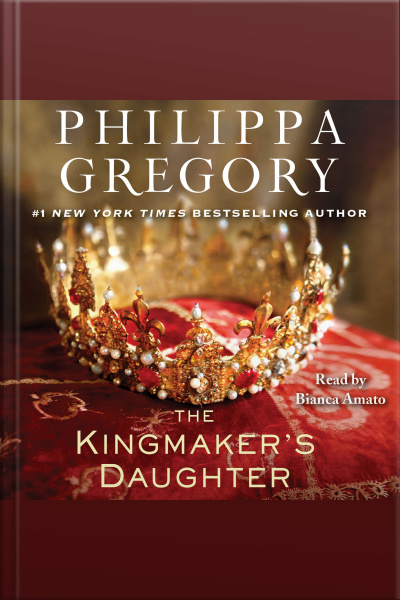 This reading group guide for The Kingmaker's Daughter includes an introduction, discussion questions, ideas for enhancing your book club, and a Q&A with author Philippa Gregory. The suggested questions are intended to help your reading group find new and interesting angles and topics for your discussion. We hope that these ideas will enrich your conversation and increase your enjoyment of the book.

The Kingmaker’s Daughter is an adventurous and exciting novel that tells the story of the daughters of the ruthless Earl of Warwick. Anne, the Earl’s youngest daughter and the novel’s narrator, is a fanciful young girl at the start of the story—but by the end, she has grown into a woman who knows of both the pleasures of love and the deep, devastating pain of loss.

The destinies of Anne and her elder sister, Isabel, have been decided by their father, and they are used repeatedly as pawns in his plays for political power. But when he turns against Queen Elizabeth and King Edward IV, the same king he fought to put on the throne not so long ago, he is killed in battle, leaving Anne and Isabel to fend for themselves in the lives he has created for them. Their paths ultimately lead them to the court of Elizabeth and Edward, where it is never fully clear to them who is friend and who is foe. Anne and Isabel, both having married one of the King’s brothers, must fight to protect themselves and their families from a queen who appears to be ready to strike at any moment for the sins of their father.

Throughout, the great wheel of fortune keeps turning: Both girls have to constantly choose between loyalty to their husband and loyalty to the other people that they love. The right course of action is never clear to them. In the end, as Anne lies on her deathbed in the company of Elizabeth’s beautiful eldest daughter, one thing is certain: “You can go very high and you can sink very low, but you can rarely turn the wheel at your own bidding” (ms-367).

1. Anne, only eight years old when the novel begins, grows up over the course of the book’s twenty-year span. In what major ways does her voice change from the beginning of the novel to the end? At what point in the novel do you feel she makes a real transition from a young girl to a woman, and why?

3. If The Kingmaker’s Daughter was narrated by Isabel instead of Anne, in what major ways do you think the tone of the novel would change? How might the main characters be portrayed differently from Isabel’s point of view?

4. Anne’s feelings toward Elizabeth Woodville grow colder as the novel progresses. Consider the below quotations from the beginning of the book, and discuss: What might the Queen Anne presented in the novel’s final pages have to say about her earlier words?
a. “She is breathtaking: the most beautiful woman I have ever seen in my life. At once I understand why the king stopped his army at the first sight of her, and married her within weeks.” (ms-1)
b. “We don’t like the queen.” (ms-21)
c. “I cannot see the queen as my enemy, because I cannot rid myself of the sense that she is in the right and we are in the wrong . . .” (ms-51)

5. “You can go very high and you can sink very low, but you can rarely turn the wheel at your own bidding” (ms-367). The tarot card the Wheel of Fortune is a theme that runs throughout the novel. Discuss the Wheel of Fortune and its implications for each of the main characters. Does fortune favor any character in particular? Do you feel that the characters are at the mercy of fortune, or do they make or choose their own fates?

6. Isabel is forever changed when she gives birth to a stillborn baby boy in a storm at sea. Anne notes that many people blame the tragedy on witchcraft, or an evil curse. Do you think Isabel agrees with their assessment? Who do you think Isabel, in her heart, blames for the death of her son: Her father? Herself? Anne? Who do you think is ultimately to blame, and why?

7. It is clear that the men in the novel play a large part in shaping the destiny of the women around them—but what major decisions do the women in the novel make for themselves? Which female character do you feel is the most in control of herself and her path? Consider that character’s status in the novel; do you think her power, or lack of it, at court contributes to the power she holds over her own life?

8. What role do the mothers in the novel play? Discuss how they are viewed and treated by their children, their daughters- and sons-in-law, and their husbands; do you think they are deserving of the treatment they receive? Also consider what it means to be a mother during the time period in which the novel takes place; what are a mother’s main responsibilities, and which mother in the novel do you think fulfills her responsibilities most successfully?

9. Anne learns how to be a queen from both Margaret of Anjou and Elizabeth Woodville. What virtues do each of these queens teach her, whether directly or indirectly, and how does she employ those virtues when she finally becomes the Queen of England? Ultimately, which queen do you feel had the stronger impact on Anne’s regal style?

10. “I see Richard’s warmth toward her and I wonder again, what is courting and what is charade?” (ms-360) Consider the relationship that develops between Richard and young Elizabeth. How much of it do you think is truly a calculated political move by Richard to discredit her betrothal to Henry Tudor, as he protests, and how much of it is for his own pleasure? Further, how does his relationship with Elizabeth change his feelings for Anne? By the end of the novel, how has their love changed?

11. Anne and Isabel’s father, the powerful and ruthless Earl of Warwick, is known throughout England as a powerful Kingmaker—yet, he is not the only “kingmaker” in the novel. Which other characters might you consider to be a maker of kings, and why? Which kingmaker do you feel is the most successful?

12. Consider the different Kings and Queens who take the throne during the events of the novel. Who are feared by those around them? Who are liked? Who are respected? Of these three values—fear, love, and respect—which do you feel is the most important for a royal family to command from their subjects, and why?

1. Much of the novel is set in or around the notorious Tower of London. At the Tower’s official website (http://www.hrp.org.uk/TowerOfLondon/ ) you can take a virtual tour of the grounds and rooms—including the Bloody Tower, where the two sons of King Edward IV were held before they mysteriously disappeared.

2. Christmastime was a time of great festivity for the King and Queen of England, a time in which they showcased their position through celebration. As Anne notes on page ms-337, “[Christmastime] is when people start to make a legend about our court and say it is as beautiful and as joyous and as noble as Camelot.
a. Just as Richard commanded the best musicians, playwrights, and poets to do, create your own song, play, or poem for King Richard and Queen Anne. How would you praise them?
b. Describe your own Christmastime celebration. If you were an English monarch, what festivities would you plan to showcase your court’s beauty, joyousness, and nobility?

5. Philippa Gregory is the author of multiple bestselling novels and is a recognized authority on women’s history. To learn more about Philippa and her books, visit her website at http://www.philippagregory.com/ .


A Conversation with Philippa Gregory

When you began planning to write this book, the next installment in your Cousins’ War series, how did you settle upon Anne as the narrator? What is it about Anne Neville, her voice and her story that called for your attention?

I wanted to write a book about both the Warwick daughters, but there is very little material available about both of them. Isabel dies earlier, so it was better to have Anne as the narrator. This is a bit of a cold-hearted technical choice – now I have researched her life and written a novel from her point of view. I must say that I have become tremendously fond of her, and I think her life demonstrates she was a courageous, persistent and determined woman who took her own decisions. A lot of the conventional histories of her life see her very much as a victim of the decisions of others – but I think she must have made many of her own decisions. Surely she could have gone into sanctuary as her mother did, when they landed in England and found that her father was dead? But instead she chose to march with the Lancaster army. Also, I don’t believe that Richard could have kidnapped her from her sister’s house and kept her in hiding before their wedding if she had been unwilling. Looking at her as a real person, facing real choices, has made her a deeply interesting character to me.

Anne interprets Elizabeth Woodville to be her enemy for much of The Kingmaker’s Daughter; and yet, there are moments in which Anne senses that Elizabeth is truly in the right. Did you intentionally write the book in such a way that readers who may not be familiar with Elizabeth’s story would find themselves questioning how “evil” she really is? Was it difficult balancing her good and “evil” values through Anne’s narration of her?

All of the books of this series have been involved with the different viewpoints of the different players of the Wars of the Roses, which were known at the time as the ‘Cousins’ War.’ There are times when Elizabeth is clearly in the right – as a crowned ordained queen facing rebels. But there are times when Anne and the reader must question what Elizabeth is doing. It’s been a complex and complicated series to write and there are no clear heroes or villains – though of course everyone will have their favorites. In this book especially, I wanted us to see how Anne’s first star-struck view of Elizabeth turns into fear, that Elizabeth inspired fear,...