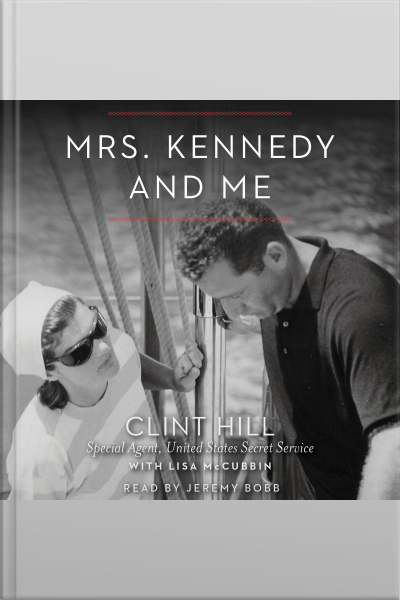 Mrs. Kennedy And Me: An Intimate Memoir

This reading group guide for Mrs. Kennedy and Me includes an introduction, discussion questions, and ideas for enhancing your book club. The suggested questions are intended to help your reading group find new and interesting angles and topics for your discussion. We hope that these ideas will enrich your conversation and increase your enjoyment of the book.

An engrossing chronicle of Special Agent Clint Hill’s four years assigned to First Lady Jacqueline Kennedy’s secret service detail, Mrs. Kennedy and Me follows Hill from his first meeting with Jackie after her husband was elected President in 1960, through her years in the White House, summers in Hyannis Port, weekends at her estate in the Virginia countryside, winters at the Kennedy residence in Palm Beach, and her travels around the world including Paris, Greece, India, and Pakistan. Here are Clint Hill’s lively, humorous, and touching memories of Jackie, John, Caroline, and John Jr., and his account of the tragic day in November 1963 when JFK was killed while Mr. Hill was riding in the Presidential motorcade. Clint Hill earned the trust of the intensely private and enchanting first lady, and became her friend and confidant.

1) How do you think Mr. Hill’s own childhood and background prepared him for being a secret service agent?

2) Did you learn anything in this book about John F. Kennedy or Jackie that surprised you?

3) Clint Hill devised a number of ingenious solutions that allowed Mrs. Kennedy to live the life she wanted to yet remain safe, whether it was water skiing or riding horses or traveling abroad. Which solutions were you most impressed by?

4) Jacqueline Kennedy was intensely private and committed to maintaining as normal a life possible for herself and her children. Would you enjoy being in the public eye the way Jackie was? Would you relish the attention or lament the lack of privacy?

5) How do you think Clint Hill’s family dealt with the demands of his job? What would it be like to be married to a Secret Service agent?

6) When informing Clint he’d be traveling with Mrs. Kennedy to Paris and Greece, Jerry Behn, the Special Agent in Charge, told him to “stay loose.” (p. 67) What do you think are some of the personal and psychological attributes necessary to being a good Secret Service agent?

7) What were some of your perceptions and assumptions about Jack and Jackie before reading this book? Did any of those perceptions change?

8) What did you think when John Kennedy told Clint as he was about to leave for Greece, “Do not let Mrs. Kennedy cross paths with Aristotle Onassis”? (p. 72)

9) If you could choose to be in the Secret Service for any of the Presidents or First Ladies in history, to whom would you most like to be assigned? Why?

10) While traveling in India, Clint Hill got the message that he was assuming command of the First Lady’s protective detail. (p. 134) Why do you think Agent Jim Jeffries was dismissed?

11) If you could sit down with Clint Hill what questions would you most like to ask him about John and Jackie Kennedy?

12) In an incident at National Airport in Washington, D.C., Clint Hill ripped the film out of a photographer’s camera after Mrs. Kennedy insisted on not allowing press to photograph her and the children. (p. 188) What do you think about the rights of the paparazzi and the press to have access to people in the public eye?

13) How do you think the assassination of John F. Kennedy changed the way the Secret Service operates?

2) Look up on the Internet the current presidential detail: http://www.secretservice.gov/ Can you determine how the Secret Service has changed since the 1960s? Look at the job openings. Do you think you have what it takes? Could you imagine doing this job?

3) The Secret Service all had code names that began with the letter D. Clint Hill was “Dazzle.” (p. 113) Choose a letter and assign everyone in the book club an appropriate code name.