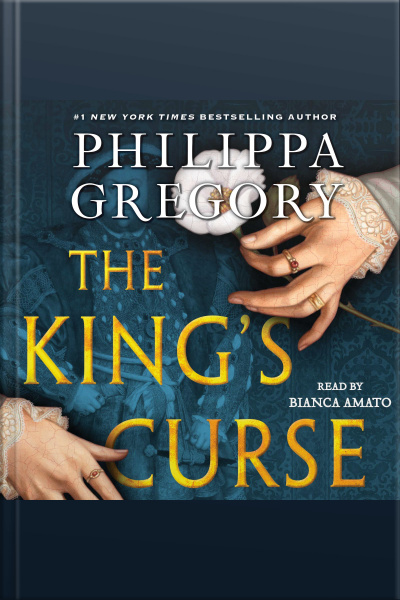 This reading group guide for The King’s Curse includes an introduction, discussion questions, ideas for enhancing your book club, and a Q&A with author Philippa Gregory. The suggested questions are intended to help your reading group find new and interesting angles and topics for your discussion. We hope that these ideas will enrich your conversation and increase your enjoyment of the book.

Lady-in-waiting Margaret Pole, Countess of Salisbury, has spent her entire life attempting to deny her own royal blood and Plantagenet name while in service of the Tudor court. Her proximity and understanding of the court give her a unique view of Henry VIII’s stratospheric rise to power in Tudor England.

England is under a Tudor king. Henry VII, has two sons with Elizabeth of York, which should have secured his line, yet his court is still filled with fear and suspicion. Plantagenet is a dangerous name to carry and the heiress Margaret Pole, cousin to Elizabeth of York (known as the White Princess) and daughter of George, Duke of Clarence, is married off to a steady and kind Lancaster supporter—Sir Richard Pole. But her brother Edward’s claim cannot be ignored. Henry executes him on Tower Hill, leaving Margaret to face a lifetime of uncertainty. Caught between the old world and the new, Margaret has to find her own way as she carries the knowledge of an old curse on the house of Tudor.

1. The King’s Curse spans over forty years of Lady Margaret Pole’s presence in and around the Tudor court, as she and her family rise and fall from favor with Henry VII and then Henry VIII. How do Lady Margaret, her characteristics, and her goals change over the course of her life at and away from court?

2. Discuss the meaning of the title, The King’s Curse. What is the actual curse? How does Henry VIII’s belief that he is cursed affect his behavior? Do you believe that the curse that Elizabeth of York and her mother spoke against the Tudors comes to fruition?

3. Consider how deeply Margaret is affected by the execution of her brother Edward, “Teddy,” the Earl of Warwick. How does this affect her familial loyalty and influence her actions? What does it mean to Margaret to bear the name Plantagenet? What does the White Rose mean to her?

4. How does Margaret see Henry VIII change over the course of his life? As a child, how was he different from his brother Arthur, Prince of Wales? What are his primary characteristics as a young king, and then as an aging monarch?

5. Describe the ways in which motherhood and maternity are portrayed in The King’s Curse. How does the pressure to produce a male heir define the role of royal mothers? How does Margaret’s presence at the loss of so many royal babies affect her own view of motherhood? Compare the differences between Katherine of Aragon’s and Margaret’s sense of motherhood.

6. Lady Margaret Pole is a unique figure in the Tudor court: when her title is restored to her, she becomes one of the wealthiest individuals in England in her own right. In what ways does Margaret use her position and influence that was unusual for a woman of this time?

7. “‘It’s just that from boyhood, the king has never admired something without wanting it for himself,’” Margaret cautions her cousin Edward, Duke of Buckingham. How does Margaret’s advice to her family to desire obscurity, and therefore safety, contradict her ambitions for her family, her sons in particular, and desire for power? What does the loss of Margaret’s son Arthur mean to her? Consider this moment: “We walk back to the house, and I look at the great house that I have renewed, with my family crest above the door, and I think, as bitterly as any sinner, that all the wealth and all the power that I won back for myself and my children could not save my beloved son Arthur from the Tudor sickness.”

8. Margaret forces Reginald to stay in the king’s service as a scholar and theologian, even if it means being exiled to Padua, Paris, and Rome and separated from his family; Reginald resents his mother for much of his life because of this. Do you think this shaped Reginald’s opinion toward the new religion and his eventual letter to the king on his findings? Why or why not?

9. Compare and contrast Margaret’s attitudes about illness, contagion, and death with those of Henry VIII. How does each handle the Sweat and other diseases among their subjects? How is each affected by the death of Katherine of Aragon?

10. Think back to the promise that Margaret made to Katherine when she first revealed Prince Arthur’s deathbed wish to his young wife: If Margaret had not promised to keep Katherine’s secret then, how might have the following events turned out differently?

11. The wheel of fortune, or rota fortunae, is a popular notion in medieval philosophy that refers to the unpredictability of fate: the goddess Fortuna spins the wheel at random, changing the positions of those on the wheel. Keeping this in mind, discuss the many great fortunes and misfortunes that befall Margaret and her family, and England as a whole, throughout the novel. What is the driving force behind these quick changes of fortune?

12. “The one thing I would have taught him, if I had kept him at my side, is to never weary of life, but to cling to it. Life: at almost any cost. I have never prepared myself for death, not even going into childbed, and I would never put my head down on the block.” Margaret encourages her children to choose life on multiple occasions, even over loyalty or truth. What does this tell us about Margaret’s moral compass? How does this guide the decisions she makes for herself and her children?

13. Lady Margaret Pole was beatified by the Catholic Church as a martyr in 1886 by Pope Leo XIII; her feast day is celebrated on May 28. In The King’s Curse, Margaret is portrayed as devout to the church and the old ways and is outraged when Henry VIII allows Cromwell to shut down England’s abbeys, priories, and monasteries. How does Margaret’s religious devotion influence her family’s involvement with the Pilgrimage of Grace? How do you think Margaret reconciles her disagreement with the king over religious issues, but outward loyalty to the throne?

1. The King’s Curse provides a different perspective on some of the same events that are included in many Tudor novels, including books by Philippa Gregory, such as The Other Boleyn Girl. Compare Margaret Pole’s version of events with those in works of historical fiction set in this era. If you haven’t read any, check out the other books in Philippa Gregory’s Cousins’ War series and Tudor Court novels.


A Conversation with Philippa Gregory

I was aware of Margaret as the daughter of George, Duke of Clarence, as one of the children of the three brothers of York: Edward, George, and Richard. But she really came to my attention when I was writing The White Princess and I understood her intimacy and shared interests with Elizabeth of York, her cousin.

How did Margaret’s role on the outskirts of the Tudor court allow you to create a unique insight into the events of Henry VIII’s rise and reign?

She is a marvelous character to use as a narrator since she is intimate with Henry from his earliest years, a close friend of his mother, and then the friend and constant companion of his first wife. She sees him as only a member of his family could see him grow and mature, and she is uniquely placed to watch his deterioration.

What were some of the challenges of using a lesser-known historical figure as a narrator at the center of a novel compared to one that has been written about extensively, such as Anne Boleyn or Henry VIII himself?

The advantage of a character whose life has not been thoroughly researched is that you avoid strong preconceptions and prejudices from the reader; as a writer of fiction based on the facts you are able to tell the story as you see it—and not be constantly compared to another writer’s version. The disadvantage of course is that there are gaps in the historical record and gaps in the speculation which historians bring to well-worked topics. For much of the time we don’t know what Margaret was doing in response to the great events of her time or what she thought of them. Even the evidence for her treason—the badge of the white rose—was produced by Thomas Cromwell but there is no proof that it was hers. As I looked at her life I began to think that she must have supported the Pilgrimage of Grace, and the attempts to secure the safety of Mary Tudor—but this was a conspiracy and the secrets are still hidden.

What kind of research did you do for this book?

I read! It’s almost always lots and lots of reading. I visited some of the places, even driving around her home at the village of Stourton. I revisited Ludlow Castle and the Tower of London and the familiar Tudor places. But the main research for all these Plantagenet and Tudor books is the extensive reading of primary but mostly secondary sources.

Margaret holds a strong opinion for her entire life that the Plantagenets were the true royal family of England. Do you agree with her?

Absolutely, there is no argument that Henry VII took the throne by force, that he tried to justify the claim through his marriage to Elizabeth, and the blackening of Richard III’s reputation was to bolster his taking of the throne in combat. The true heir to Richard III’s throne would have been his nephews by Edward IV (the Princes in the Tower if they had survived) or his nephew by George, Duke of Clarence—Margaret’s brother, Edward of York.

Is there any evidence of a curse on the house of Tudor, spoken by Elizabeth of York and her mother, or by any other?

This has been one of the fascinating unfolding research stories during the course of writing fiction. I first invented a curse when I wanted Elizabeth Woodville (Edward’s queen) and her mother, Jacquetta, to respond to the news that the Princes in the Tower were missing, presumed dead. Writing a novel it seemed to be a nicely rounded piece of fiction for them to curse the line of the murderer of their boys, which raised a question about the guilt of both Richard III and Henry VII—the two suspects.