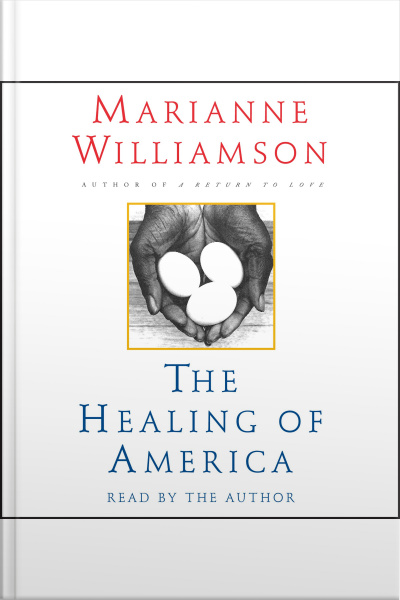 The Healing Of America [abridged]

"In a nation of 260 million our healing is actually extremely personal. We must each mature into a deeper understanding of our lives and why we're living them, for such understanding is the womb out of which will come new life for American culture."
With the publication of The Healing of America, Marianne Williamson becomes a powerful voice for social conscience in American society. While citing the virtual abandonment of social justice as a dominant political theme since the 1960's, Williamson notes historian Arthur Schlesinger's contention that Americans express renewed political interest every thirty years. This is a time, according to Williamson, for Americans to once again return to first principles -- political and spiritual. In this landmark work, Williamson draws plans for the transformation of American political consciousness and the re-emergence of powerful citizen involvement in a genuine healing of American society.
According to Williamson, we need a new paradigm of political understanding, a moral commitment to express it, and a new kind of activism to bring it forth. The Healing of America is a blueprint for all three.