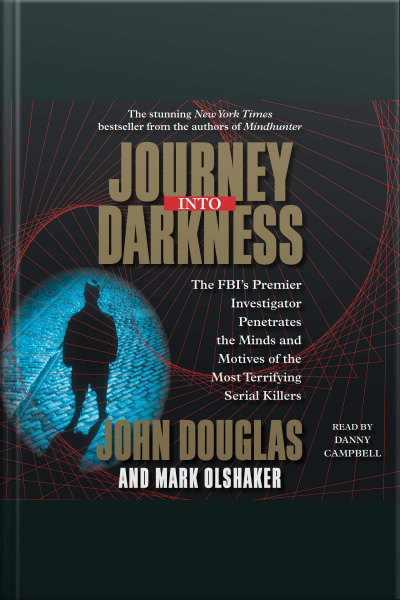 In the #1 New York Times bestseller Mindhunter, John Douglas, who headed the FBI's elite Investigative Support Unit, told the story of his brilliant and terrifying career tracking down some of the most heinous criminals in history. Now, working again with his coauthor Mark Olshaker, Douglas delves further into the criminal mind with a series of chilling new cases.

Follow the FBI’s premier investigative profiler as he penetrates the minds and motives of the most terrifying serial killers.

In Journey into Darkness, Douglas profiles vicious serial killers, rapists, and child molesters. Some of the unique cases Douglas discusses include the Claremont killer, the schoolgirl murders that became known as Canada’s “trial of the century,” Richmond, Virginia’s first serial murderer, and the double homicide of Nicole Brown Simpson and Ronald Goldman.

With Journey into Darkness, Douglas provides more than a glimpse into the minds of serial killers; he demonstrates what a powerful weapon behavioral science has become. Profiling criminals helps not only to capture them, but also helps society understand how these predators work and what can be done to prevent them from striking again.

Journey into Darkness continues this perilous trip into the psyche of the serial killer, but also offers a glimmer of hope that profiling may enable law enforcement to see the indicators of a serial killer's mind and intervene before he kills—or kills again.