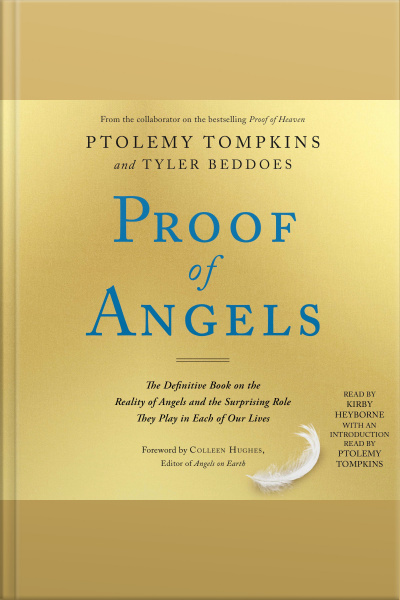 Proof Of Angels: The Definitive Book On The Reality Of Angels And The Surprising Role They Play In Each Of Our Lives

From the collaborator of the blockbuster bestseller Proof of Heaven comes the definitive book proving angels are real, all around us, and interacting in our lives every day.

In March 2015, millions worldwide were captivated by news reports of the dramatic rescue of an eighteen month old girl, Lily Groesbeck, who’d somehow survived fourteen hours in an overturned car partially submerged in an icy-cold Utah river after her mother apparently lost control of the vehicle. A voice the four responding officers assumed was the child’s mother still trapped inside spurred them on: “Help me, help me.” Yet, once the two victims were recovered, it was clear that the voice could not have come from Lily’s mother: she’d been killed on impact.

New York Times bestselling author Ptolemy Tompkins, with the help of Tyler Beddoes, one of the responding officers who helped rescue Lily, will explain this modern-day miracle and the existence of angels in our world.

Proof of Angels weaves real-life stories into a rich narrative, exploring the history, nature, and significance of angels in our lives. With an introduction by Colleen Hughes, the editor-in-chief of Angels on Earth magazine, Proof of Angels proves that the barrier between the spiritual and the scientific is less certain than we often think. Not only does Tompkins offer a highly entertaining look into a universally fascinating topic, but he also delivers a fresh and deeply reassuring message: we are not alone.