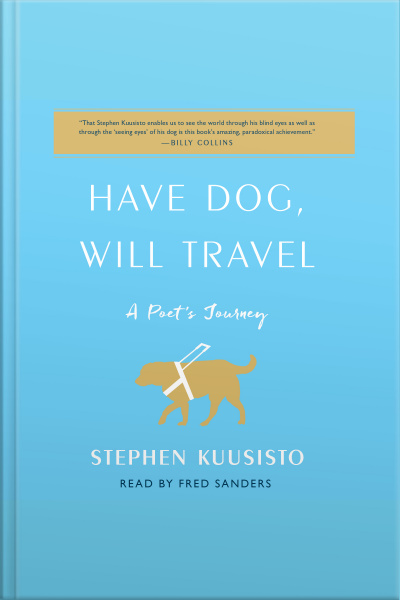 Have Dog, Will Travel: A Poet's Journey With An Exceptional Labrador

In a lyrical love letter to guide dogs everywhere, a blind poet shares his delightful story of how a guide dog changed his life and helped him discover a newfound appreciation for travel and independence.

Stephen Kuusisto was born legally blind—but he was also raised in the 1950s and taught to deny his blindness in order to "pass" as sighted. Stephen attended public school, rode a bike, and read books pressed right up against his nose. As an adult, he coped with his limited vision by becoming a professor in a small college town, memorizing routes for all of the places he needed to be. Then, at the age of thirty-eight, he was laid off. With no other job opportunities in his vicinity, he would have to travel to find work.

This is how he found himself at Guiding Eyes, paired with a Labrador named Corky. In this vivid and lyrical memoir, Stephen Kuusisto recounts how an incredible partnership with a guide dog changed his life and the heart-stopping, wondrous adventure that began for him in midlife. Profound and deeply moving, this is a spiritual journey, the story of discovering that life with a guide dog is both a method and a state of mind.