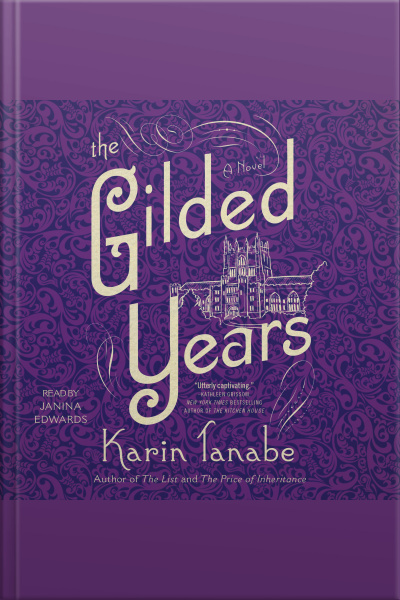 The Gilded Years: A Novel

SOON TO BE ADAPTED FOR FILM in A White Lie, a TriStar major motion picture, starring and produced by Zendaya in collaboration with Reese Witherspoon’s Hello Sunshine.

“Tanabe immerses the reader in a world of romance and manners, but also leaves you gripping the edge of your seat…An elegant and extremely gratifying imagining of one remarkable woman's life.” —USA TODAY

“Based on the true story of the first African-American woman to ever go to Vassar College. The catch? No one knew she was African-American…Think: “Gatsby” meets college meets an impressive beach read." —theSkimm

Passing meets The House of Mirth in this “utterly captivating” (Kathleen Grissom, New York Times bestselling author of The Kitchen House) historical novel based on the true story of Anita Hemmings, the first black student to attend Vassar, who successfully passed as white—until she let herself grow too attached to the wrong person.

Since childhood, Anita Hemmings has longed to attend the country’s most exclusive school for women, Vassar College. Now, a bright, beautiful senior in the class of 1897, she is hiding a secret that would have banned her from admission: Anita is the only African-American student ever to attend Vassar. With her olive complexion and dark hair, this daughter of a janitor and descendant of slaves has successfully passed as white, but now finds herself rooming with Louise “Lottie” Taylor, the scion of one of New York’s most prominent families.

Though Anita has kept herself at a distance from her classmates, Lottie’s sphere of influence is inescapable, her energy irresistible, and the two become fast friends. Pulled into her elite world, Anita learns what it’s like to be treated as a wealthy, educated white woman—the person everyone believes her to be—and even finds herself in a heady romance with a moneyed Harvard student. It’s only when Lottie becomes infatuated with Anita’s brother, Frederick, whose skin is almost as light as his sister’s, that the situation becomes particularly perilous. And as Anita’s college graduation looms, those closest to her will be the ones to dangerously threaten her secret.

Set against the vibrant backdrop of the Gilded Age, an era when old money traditions collided with modern ideas, Tanabe has written an unputdownable and emotionally compelling story of hope, sacrifice, and betrayal—and a gripping account of how one woman dared to risk everything for the chance at a better life.