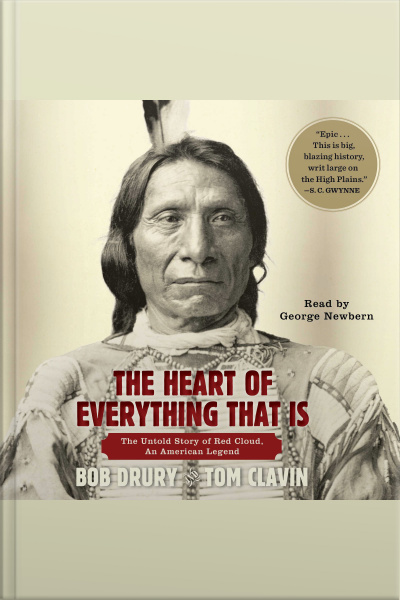 The Heart Of Everything That Is: The Untold Story Of Red Cloud, An American Legend

This reading group guide for The Heart of Everything That Is includes an introduction, discussion questions, and ideas for enhancing your book club. The suggested questions are intended to help your reading group find new and interesting angles and topics for your discussion. We hope that these ideas will enrich your conversation and increase your enjoyment of the book.

Though he was the only American Indian ever to defeat the United States Army in a war, the incredible story of the Sioux warrior Red Cloud was, for a long time, lost to history. In an era when expansion westward was at the forefront of the U.S. government’s mind, Red Cloud and his army of Sioux, Cheyenne, and Arapaho warriors mounted a powerful defense against the white man’s invasion of their lands—so powerful that they ultimately forced the U.S. government to sue for peace on their terms. This was an outcome that had never occurred before—and would never occur again. In The Heart of Everything That Is, Bob Drury and Tom Clavin tell the story of Red Cloud’s rise to power against the backdrop of an exciting, dangerous, and in many ways tragic epoch, when American Indian warriors like Crazy Horse and Sitting Bull battled for the lushest hunting grounds and the prospect of gold and adventure lured men like John Bozeman and Nelson Story to the West. But even among these great men, Red Cloud stands out as having lived nothing short of an epic life, first overcoming his lack of patriarchal lineage to become an elite headman and great warrior, and then managing to gather many disparate, angry tribes under his leadership and proving to the U.S. government that he and his warriors would not abandon their land or their traditions without a long and bloody fight.

1. Part I opens with a quote by Walter Prescott Webb: “East of the Mississippi civilization stood on three legs—land, water and timber. West of the Mississippi not one but two of those legs were withdrawn—water and timber. Civilization was left on one leg—land. It is a small wonder that it toppled over in temporary failure.” How does this quote set the stage for the book? Do you think this quote aptly sums up the conflict between the U.S. Army and American Indians?

2. In one sense, before and during Red Cloud’s War, both sides were fighting for land. But the reality was much more complicated. Is it fair to say that the Indians were fighting to preserve their way of life, while the army was fighting for ownership of territory? How would you describe the motivations of the two sides?

3. Consider that during the Revolutionary War, the U.S. Army employed the same guerilla-style tactics that Red Cloud was using against them, and was successful in defeating the British. Given this, do you think if the U.S. military had re-planned its strategy and adopted the Sioux style of warfare, it would have been more successful in driving off Red Cloud’s forces? Conversely, do you think that if Red Cloud had tried harder to adopt some of the militaristic maneuvers of the army, he might have kept the white invaders out of Indian lands for a longer period of time?

4. The authors mention that it was said after the Civil War that “Abe Lincoln may have freed all men, but Sam Colt made them equal.” How true do you find this statement? If the Indians had been equipped with the same caliber of guns the U.S. Army had, do you feel that the outcome of Red Cloud’s War might have been different?

5. The battle for western territory took somewhat of a hiatus as the Civil War was being waged back east. What do you think of Lincoln’s attitude toward the Indians? Do you find it incongruous that he was fighting a war that was, at least in part, about abolishing the slavery of one people, yet on the other side of the country, his own men were fighting to, at the very least, severely rein in the freedom of another people?

6. How did Red Cloud’s childhood determine the man and warrior he grew up to be? If he had not been forced to struggle so hard for acceptance and work so hard to earn his status among his people, do you think the fight against the white man’s invasion would have meant nearly as much to him?

7. Did the tragedy of Red Cloud’s romance with Pine Leaf change the way you viewed him? Did it surprise you that he chose to remain monogamous after Pine Leaf’s suicide?

8. The authors point out that “Sherman was slow to recognize that the progress of civilization would be more effective in subduing the Indians than any act of war.” Do you think a lot of bloodshed and hardship might have been saved if the United States had stepped back and simply let modernization (for example, the construction of the railroads) do the work of conquering the West, rather than soldiers?

9. One of the biggest problems Red Cloud faced was that it was impossible to truly unite so many tribes, even though they all wanted the same thing. Given the ingrained lifestyle of many of the Plains Indians as small bands of nomadic, conquering peoples who were constantly fighting each other, do you think their fate, heartbreaking as it was, was inevitable? Can you think of an example in history that proves otherwise?

10. Do you feel the authors maintained impartiality throughout the book? Did you find yourself consistently sympathetic to Red Cloud and the Sioux, or was it hard for you to reconcile the brutality of their warrior mindset with the difficulty of their situation? Is it fair to judge them for their violent methods, given that they held all opponents (other Indians and white men alike) to the same standard, while the U.S. soldiers obviously did not? Do you feel the Indians had no choice but to be vicious in the face of U.S. edicts such as “kill every male over the age of twelve”?

11. The writing of this book would not have been possible without the discovery of Red Cloud’s autobiography. Yet given that human error and human emotion play a large part in how we recall and record events, how accurate do you feel our picture of any historical event truly is? The authors also drew heavily on correspondence and diary entries from the period. How would you compare the importance of letters and journals in the nineteenth century to the present day? How have our methods of keeping records and sharing news changed? What sources do you think historians will use to piece together stories 100 years from now?

12. One thing Red Cloud’s War proved was that newspapers and other news sources could dramatically influence collective opinion. At the time, many newspapers exaggerated incidents, or simply reported facts incorrectly—and people (understandably) believed what they read, much to the Indians’ detriment. Do you think the same problem still occurs with news reporting today?

13. After the loss to Red Cloud, everyone involved in the so-called Fetterman Massacre tried to avoid being held responsible. Who, if anyone, do you think was to blame? Was it Fetterman himself, or Henry Carrington? Do you think Ten Eyck truly played a role in the defeat, as Carrington subtly implied in his written reprimand to the captain (“You could’ve saved two miles toward the scene of action if you had taken Lodge Trail Ridge”)?

14. When asked why the United States fought Red Cloud, General Bisbee wrote, “My only answer could be we did it for Civilization.” What is your interpretation of this answer? Do you think it is an honest response, and that this is what most of the U.S. soldiers truly believed? Do you think the United States would be a very different place now if we had learned to accept different interpretations of the word “civilized” during this time?

15. Were you surprised to learn that, despite his immense victory in getting the U.S. Army to agree to peace on his terms, Red Cloud’s coup lasted only one short year before the U.S. began to renege on the deal? Do you think the government should have done a better job of ensuring that the men on the ground followed the orders coming from Washington regarding this treaty?

16. Once he moved onto the Pine Ridge Reservation, Red Cloud decided he would adapt to the “white man’s lifestyle.” What do you think of his decision? In your opinion, what is the legacy of Red Cloud?

1. Nelson Story is among the many famous men mentioned in The Heart of Everything That Is, a cowboy and trailblazer who journeyed from Fort Worth, Texas, to Montana, eventually becoming Montana’s first millionaire. His “epic cattle drive” was one of the inspirations for Larry McMurtry’s Lonesome Dove. Read McMurtry’s Pulitzer Prize–winning novel as your next book club pick (or schedule a viewing of the TV miniseries starring Robert Duvall and Tommy Lee Jones), and compare the fictional and nonfictional portrayals of the American West.

2. In the notes, the authors also mention a little-known DVD titled The Authorized Biography of Crazy Horse and His Family. Watch it together to learn more about the daring warrior who played a vital role in Red Cloud’s offensive.

3. Listen to authors Bob Drury and Tom Clavin discuss The Heart of Everything That Is in an interview with NPR’s Renee Montagne. You can download the interview and read the transcript on NPR’s website: http://www.npr.org/2013/11/18/245913186/new-book-tells-untold-story-of-red-cloud-an-american-legend.

4. Pemmican, a nutritious and energy-laden jerkylike mixture, was a staple food of the western Indians. Whip up a batch and enjoy it at book club (or plan a hike and carry it along as fuel for the way). If you are feeling adventurous, you can even use buffalo meat! There are many websites with recipes and resources (for example, see http://scdlifestyle.com/2013/02/bacon-pemmican-the-ultimate-paleo-travel-food/).

5. During the time of Red Cloud’s War, photography was a just-emerging art, and the ill-fated Ridgeway Glover traveled out west specifically to take tintypes (photographs shot on metal plates that had been coated with a light-sensitive emulsion). While you may not be able to use the original equipment Glover carried, you can create your own faux tintypes by following this great Instagram tutorial: http://blog.instagram.com/post/24739159388/instatypes-make-faux-tintypes-at-home.