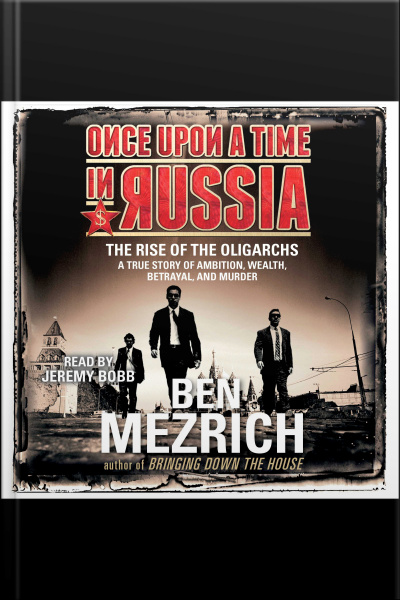 Once Upon A Time In Russia: The Rise Of The Oligarchs And The Greatest Wealth In History

The New York Times bestselling author of Bringing Down the House and The Accidental Billionaires tells his most incredible story yet: A true drama of obscene wealth, crime, rivalry, and betrayal from deep inside the world of billionaire Russian oligarchs that Booklist called “one more example of just how talented a storyteller [Mezrich] is.”

Meet two larger-than-life Russians: former mathematician Boris Berezovsky, who moved into more lucrative ventures as well as politics, becoming known as the Godfather of the Kremlin; and Roman Abramovich, a dashing young entrepreneur who built one of Russia’s largest oil companies from the ground up.

After a chance meeting on a yacht in the Caribbean, the men became locked in a complex partnership, surfing the waves of privatization after the fall of the Soviet regime and amassing mega fortunes while also taking the reins of power in Russia. With Berezovsky serving as the younger entrepreneur’s krysha—literally, his roof, his protector—they battled their way through the “Wild East” of Russia until their relationship soured when Berezovsky attacked President Vladimir Putin in the media. Dead bodies trailed Berezovsky as he escaped to London, where an associate died painfully of Polonium poisoning, creating an international furor. As Abramovich prospered, Berezovsky was found dead in a luxurious London town house, declared a suicide.

With unprecedented, exclusive first-person sourcing, Mezrich takes us inside a world of unimaginable wealth, power, and corruption to uncover this exciting story, a true-life thriller epic for our time—“Wolf Hall on the Moskva” (Bookpage).