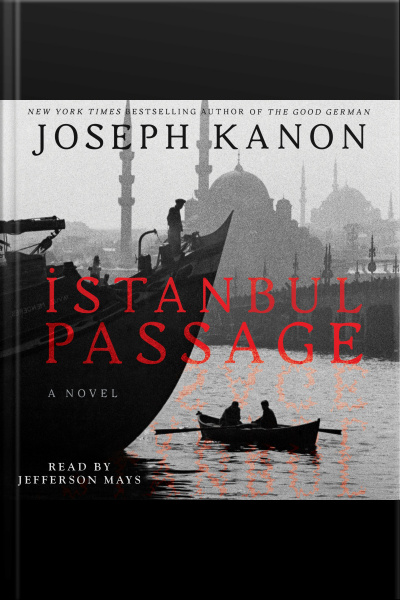 This reading group guide for Istanbul Passage includes suggested questions intended to help your reading group find new and interesting angles and topics for your discussion. We hope that these ideas will enrich your conversation and increase your enjoyment of the book.

1. What do you think the book’s title, Istanbul Passage, means? Could it represent more than one thing? What different kinds of passages take place throughout the book?

2. There is a strong sense of place in the novel–Istanbul, the Bosphorus, Galata Bridge, Bebek. How does the author describe these places in order to create a mood of deception and intrigue?

3. What is your initial impression of Leon Bauer upon first meeting him? Does your opinion of him change by the end of the book? If so, what accounted for this change?

4. Leon Bauer’s wife, Anna, is in a semi-comatose state when the book opens, yet to Leon she remains “alive, a presence, not just someone in Obstbaum’s clinic who had retreated into herself.…” To what extent does Anna haunt this book? How much do we learn about who she was and what she did as the story unfolds?

5. Both Alexei and Georg play chess with themselves, “playing both sides.” The name “Bauer” means “pawn” in German. What does the game of chess come to symbolize in the novel?

6. Alexei had a wife, Magda, who was killed. He says to Leon, “It’s a convenience, sometimes. To have nothing to lose.” Do you agree with this statement? Do you think it motivated Alexei to take chances with his own life and to have a total disregard for the lives of others?

7. Alexei says to Leon, “When you have blood on your hands, does it matter how it got there?” How would you answer this question? How does this question give insight into Alexei’s character and his murderous history?

8. Lily Nadir is described as a beautiful and wealthy woman who came from the harem and now “arranged things.” What is the nature of her relationship with Leon? With Altan? Is she a trustworthy character?

9. Istanbul’s mystique and sense of intrigue come from its many layers. Kay says to Leon, “This place. Who knows who anybody is?” Which characters are like the city—multi-layered and difficult to know at their core?

10. Leon becomes very protective of Alexei even though he knows he has done terrible things. Why do you think he comes to feel this way about the man placed in his charge?

11. Leon asks, “What do you do when there’s no right thing to do. Just the wrong thing. Either way.” Do you believe Leon was morally right in what he did? Do you think that he had other choices? Is what is “right” simply a matter of perspective and circumstance?