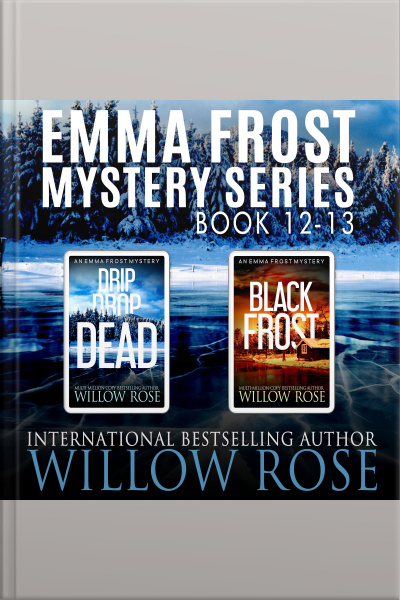 Two engulfing novels from the multi-million-copy best-selling author Willow Rose. Drip Drop Dead: The past will always haunt you. Emma Frost is chasing a killer who seems to bend the laws of physics. Things are going well for Emma Frost, for once. She has a sweet boyfriend and has just finished a new book. Her daughter Maya is doing well in high school and even her special-needs son Victor is thriving and playing with his new best friend, the strange girl who fell from the sky. But soon, a murder shocks the island of Fanoe when a woman is found dead in her bed with no apparent signs of having been killed. But as they find out she died by drowning, and more deaths like it begin to occur around the peaceful island, Emma once again finds herself following signs that lead to her own front door, while chasing a killer quite out of the ordinary. A killer who can gain access to all houses without leaving a trace. Emma has to ask herself the question: What exactly is going on in her island home and especially underneath it? Black Frost: Emma Frost is tied up in a murder mystery that seems out of this world. When a young girl disappears one night from the park, then turns up again the next morning in a different place on the island, people start to talk about her. Was she drunk and just doesn't remember what happened? Did she go home with a guy and won't admit it? What happened to her, and why is she insisting that she doesn't know? Emma Frost is fighting for Victor's best friend Skye. Emma is trying to get her back from the people who took her in the night, but having no luck when a guy falls into her arms in the street and dies a few minutes later. The autopsy shows he has frozen to death, but it doesn't seem possible. When a young boy from Victor's school turns up frozen as well, and things start to get cold around her own house, Emma begins to fear for her loved ones' lives. As the investigation moves on, and terrifying answers begin to emerge, Willow Rose's compelling story evolves rapidly, resulting in a novel with almost agonizing suspense. If you like small-town mysteries, eerie tales, and a touch of humor, then you'll love Willow Rose's whodunnit. No one is more addictive than Willow Rose.