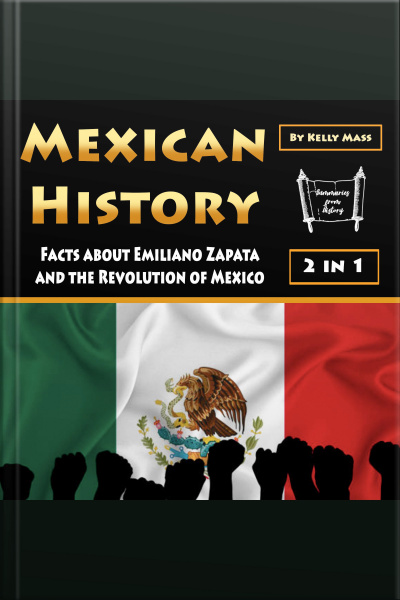 Mexican History Facts about Emiliano Zapata and the Revolution of Mexico

This book deals with the following topics:

1 - Emiliano Zapata: Emiliano Zapata Salazar was a revolutionary in Mexico. He was a key figure in the Mexican Revolt of the years 1910 until 1920, and also the primary leader of the people's revolution in the Mexican state of Morelos and the creator of the Zapatismo agrarian movement. Zapata was born in the rural town of Anenecuilco in the state of Morelos, at the time of a period when peasant communities dealt with increasing pressure from the small-landowning class, which monopolized land and water resources for sugar-cane production with the support of totalitarian Porfirio Daz (President from the year 1877 to 1880 and from 1884 to 1911).

2 - Mexican Revolution: The Mexican Revolution was a great revolution that included a series of army local battles instead of a single united struggle. It destroyed the Federal Force and changed it with an innovative army, changing Mexican civilization and governance at the same time It also culminated in the adoption of a new constitution that included the revolutionaries' ideal visions. In spite of the fact that President Porfirio Daz's (from about 1880 to 1911) rule had grown progressively out of favor over the prior 31 years, there was no indicator that a transformation would break out in the year 1910.