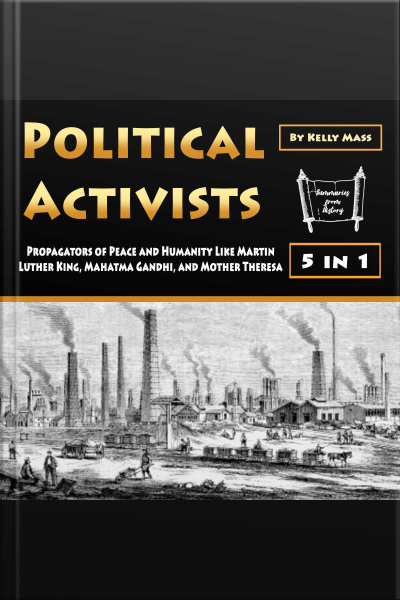 This audiobook contains the following topics:

1: John Muir was a prominent Scottish-American biologist, author, ecological philosophy, botanist, zoologist, glaciologist, and early supporter for the conservation of wilderness in the US of America. He was also called "John of the Mountains" and "Dad of the National Parks." Countless people have read his letters, essays, and books on his exploits in nature, especially in the Sierra Nevada.

2: From 1955 till his assassination in 1968, Martin Luther King Jr. was an American Baptist clergyman and activist who ended up being the most identifiable voice and leader in the American civil liberties movement. King used nonviolence and civil disobedience to advance civil liberties, inspired by his Christian convictions and Mahatma Gandhi's tranquil work.

3: Mohandas Karamchand Gandhi was an Indian attorney, anti-colonial patriot, and political ethicist who used nonviolent resistance to lead the triumphant struggle for India's independence from British rule, motivating civil liberties and liberty movements around the globe.

4: Mother Mary Teresa Bojaxhiu, typically referred to as Saint Teresa of Calcutta in the Catholic Church, was an Albanian-Indian Roman Catholic nun and missionary. She was born in Skopje (today the capital of North Macedonia), which was then part of the Ottoman Empire's Kosovo Vilayet.

5: The Industrial Revolution was a period of shift in Britain, continental Europe, and the USA from around 1760 till at some point between 1820 and 1840, when new production innovations were introduced.