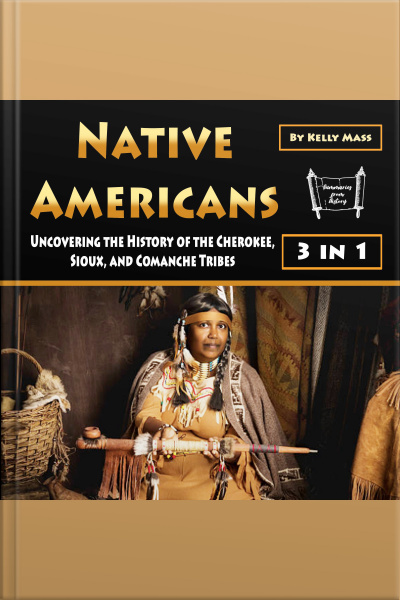 Native Americans Uncovering the History of the Cherokee, Sioux, and Comanche Tribes

This is a combo of several books, which are:

1 - The Cherokee are among the native tribes of the United States' Southeastern Woodlands. They resided in communities along river valleys in what's now southwestern North Carolina, southeastern Tennessee, the limits of western South Carolina, northern Georgia, and northeastern Alabama just before the 18th century. Cherokee belongs to the Iroquoian language family. One oral legend tells of the people moving south in age-old times from the Great Lakes area, where other Iroquoian-speaking tribes were based, according to James Mooney, an early American ethnographer.

2 - The Comanche are a Native American people from the contemporary United States' Great Plains. Most of contemporary northwestern Texas, and also surrounding parts in eastern New Mexico, southeastern Colorado, southwestern Kansas, western Oklahoma, and northern Chihuahua, were previously part of their historical domain.

The Comanche people are acknowledged by the federal government as the Comanche Country, which is headquartered in Lawton, Oklahoma.

The Comanche language belongs to the Uto-Aztecan family of Numic languages. It started as a Shoshoni dialect, but has since developed into its own language.

3 - The Sioux, also called the Oceti Sakowin are a North American people of Native American tribe and First Countries tribes. The contemporary Sioux are split into 2 significant groups based upon language: Dakota and Lakota; they're called together as the Ohéthi akówi ("7 Council Fires"). The term "Sioux" is an exonym stemmed from a French transliteration of the Ojibwe term "Nadouessioux," and can apply to any ethnic group or language dialect within the Great Sioux Country.