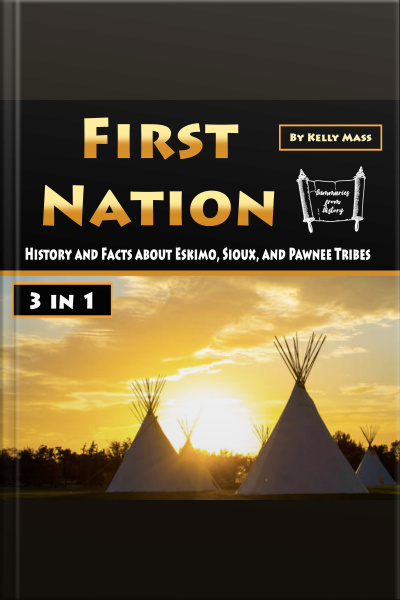 The following 3 books are contained in this audiobook:

1: The Inuit (consisting of Alaskan Iupiat, Greenlandic Inuit, and Canadian Inuit) and the Yupik (or Yuit) of eastern Siberia and Alaska are described as Eskimo or Eskimos. The Aleut, who live on the Aleutian Islands, are a comparable 3rd group that's usually omitted from the categorization of Eskimo. The 3 groups have a current typical forefather and speak Eskimo-- Aleut languages, which relate.

The development of Europeans marks the start of Alaskan Indians' contemporary history. Russians cruising from Siberia in the eighteenth century were the first to make contact, which was uncommon for The USA and Canada. Traders from the east, mainly from The U.S.A. and Canada's eastern towns, didn't come in the area till the 19th century. Christian missionaries were not active in Alaska till the 20th century in some circumstances.

2: The Pawnee are a Central Plains Indian people that used to live in Nebraska and Kansas, yet now call Oklahoma home. They are now called the Pawnee Country of Oklahoma, and its head offices are at Pawnee, Oklahoma. Their Pawnee language belongs to the Caddoan family, and they're called Chatiks si chatiks, or "Men of Men."

The Pawnee used to live in earth lodge towns near the Loup, Republican Politician, and South Platte rivers. Throughout the year, the Pawnee people economy turned between producing crops and buffalo searching.

3: The Sioux, also called the Oceti Sakowin are a North American people of Native American tribe and First Countries tribes. The contemporary Sioux are split into 2 significant groups based upon language: Dakota and Lakota; they're called together as the Ohéthi akówi ("7 Council Fires"). The term "Sioux" is an exonym stemmed from a French transliteration of the Ojibwe term "Nadouessioux," and can apply to any ethnic group or language dialect within the Great Sioux Country.