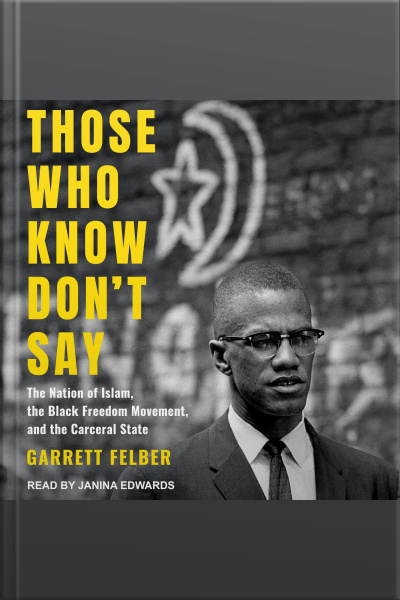 Those Who Know Don't Say The Nation of Islam, the Black Freedom Movement, and the Carceral State

Challenging incarceration and policing was central to the postwar Black Freedom Movement. In this bold new political and intellectual history of the Nation of Islam, Garrett Felber centers the Nation in the Civil Rights Era and the making of the modern carceral state. In doing so, he reveals a multifaceted freedom struggle that focused as much on policing and prisons as on school desegregation and voting rights. The book examines efforts to build broad-based grassroots coalitions among liberals, radicals, and nationalists to oppose the carceral state and struggle for local Black self-determination. It captures the ambiguous place of the Nation of Islam specifically, and Black nationalist organizing more broadly, during an era which has come to be defined by nonviolent resistance, desegregation campaigns, and racial liberalism.

By provocatively documenting the interplay between law enforcement and Muslim communities, Felber decisively shows how state repression and Muslim organizing laid the groundwork for the modern carceral state and the contemporary prison abolition movement which opposes it. Exhaustively researched, the book illuminates new sites and forms of political struggle as Muslims prayed under surveillance in prison yards and used courtroom political theater to put the state on trial.