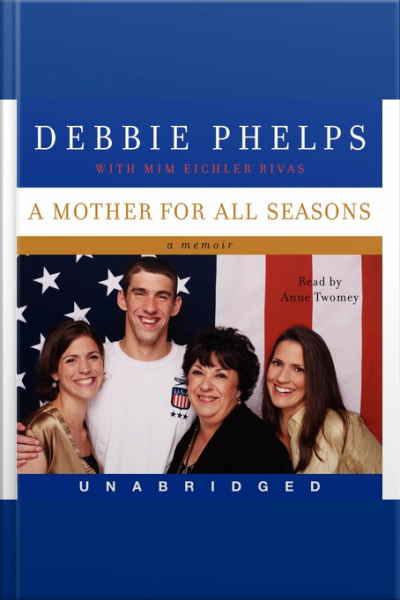 A Mother for All Seasons

A Mother for All Seasons is the heartfelt, intimate memoir of an everywoman—a single mom and an educator who raised three exceptional children, including the greatest Olympian of all time, Michael Phelps.

During the 2008 Olympic Games in Beijing, when Michael achieved the impossible with his record-shattering eight gold-medal wins, Debbie Phelps nearly stole the show. For the millions who were riveted to the most watched Olympics in history, few could forget the homage that Michael consistently paid to the one person on Team Phelps most responsible for making it all possible: his mom. Nor can we forget how after each medal ceremony, Michael walked proudly to the stands to reach up to his mother and his sisters, Hilary and Whitney, to deliver his winning bouquets to them.

While those highlights will forever be remembered the world over, very few know the behind-the-scenes stories as lived by the members of Team Phelps—a roller-coaster ride full of dramatic ups and downs, heartbreaks, and disappointments, yet one guided to triumph by vision, courage, and tenacity. Now at last, in A Mother for All Seasons, we're given the untold story as lived by the mom on the team.

An educator in home economics, motivational spokeswoman, visionary middle-school principal, mother of three, and grandmother of two, Debbie Phelps is also the eternal cheerleader who was raised in a small, blue-collar, working-class town. An avid believer that achievement is limitless for each and every child, no matter the odds, Debbie reveals the universal themes of her story, which is rich with struggle, humor, hope, advice, and passion.

Infused with the indomitable spirit of “America's mom,” as she has been called, A Mother for All Seasons rallies us to cheer for all of our children at every stage of their growth and in every endeavor. Candid, lively, and charming, it offers timely, commonsense wisdom, lessons, and insights, and provides a much-needed reminder that life doesn't always turn out how you plan it, but in fact it can sometimes turn out even better.