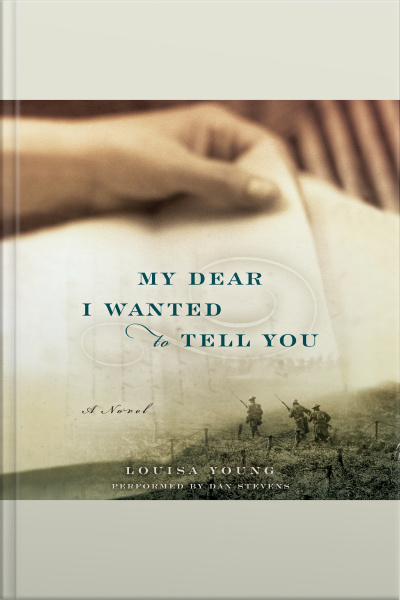 My Dear I Wanted to Tell You

The lives of two very different couples—an officer and his aristocratic wife, and a young soldier and his childhood sweetheart—are irrevocably intertwined and forever changed in this stunning World War I epic of love and war.

At eighteen years old, working-class Riley Purefoy and “posh” Nadine Waveney have promised each other the future, but when war erupts across Europe, everything they hold to be true is thrown into question. Dispatched to the trenches, Riley forges a bond of friendship with his charismatic commanding officer, Peter Locke, as they fight for their survival. Yet it is Locke’s wife, Julia, who must cope with her husband’s transformation into a distant shadow of the man she once knew. Meanwhile, Nadine and Riley’s bonds are tested as well by a terrible injury and the imperfect rehabilitation that follows it, as both couples struggle to weather the storm of war that rages about them.

Moving among Ypres, London, and Paris, this emotionally rich and evocative novel is both a powerful exploration of the lasting effects of war on those who fight—and those who don’t—and a poignant testament to the enduring power of love.