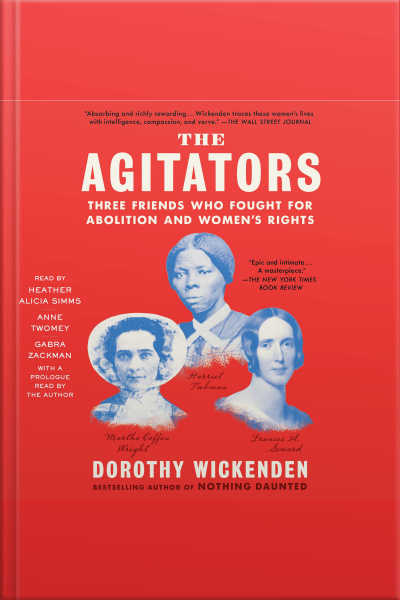 The Agitators: Three Friends Who Fought For Abolition And Women's Rights

This reading group guide for The Agitators includes an introduction, discussion questions, and ideas for enhancing your book club. The suggested questions are intended to help your reading group find interesting angles and topics for your discussion. We hope that these ideas will enrich your conversation and increase your enjoyment of the book.

Dorothy Wickenden, the New York Times bestselling author of Nothing Daunted, once again brings historical figures vividly to life in The Agitators, a riveting dive into the lives of three unlikely collaborators in the quest for abolition and women’s rights. By taking readers through the lives of these women—Harriet Tubman, Frances Seward, and Martha Wright—Wickenden offers an unusual and highly intimate perspective on the classic American stories of abolition, the underground railroad, women’s rights activism, and the Civil War.

1. Discuss the book’s epigraph. How does this quote prepare you for the text? In what way does it resonate with current events?

2. The prologue and epilogue bookend the text with vivid descriptions of Fort Hill Cemetery today. What is the value of beginning and ending the book in this way? What effect does this have on your reading experience?

3. The first three chapters establish the very different backgrounds of Martha, Frances, and Harriet and the time in which they lived. What is your sense of their personalities and how they changed over time?

4. In chapter 4, Frances’s husband, Henry, makes the extraordinarily controversial decision to defend William Freeman, the twenty-three-year-old Black man who confessed to murdering four members of a white family. This is one of the first uses of the insanity defense, which is based on the belief that a person who is unable to distinguish right from wrong should not be criminally charged because they cannot take moral responsibility for their crime. Henry’s father-in-law, a county judge, thought his defense of Freeman would end his political career. Why was Frances so supportive of his choice?

5. In chapter 5, Martha overhears a party guest calling her “a very dangerous woman” because of her social activism and her friendship with Frederick Douglass. Consider what it meant to be a “dangerous woman” in Martha’s time and place. Who, or what, is being threatened by Martha’s behavior? Is there a modern-day equivalent of the term “dangerous woman?”

6. Discuss these two quotes from chapter 13 and how they have “aged” since their initial utterance: “The United States government ‘was made by white men for the benefit of white men and their posterity forever.’” —Senator Stephen A. Douglas. “I know, and you know, that a revolution has begun. I know, and all the world knows, that revolutions never go backward.” —Senator William Henry Seward

7. Each of these women was bold, principled, and intent on changing the world. They express their idealism in different ways. Discuss the avenues and methods each used to try and affect change.

9. Harriet Tubman and her companions felt guided by their religious faith in pursuit of their activism, as did many reformers of the time, which often aided the progress of their causes. How was the political expression of evangelical thought different from how it is manifested today?

10. Harriet was an extraordinary orator and storyteller who, as the author says in chapter 15, knew how to play to “her audiences’ enthusiasm for hair-raising first-person accounts of slavery and escape.” What role does storytelling play throughout the book and in activism?

11. Throughout the book, we see Martha’s roles as activist and mother intersect. In chapter 14, “Martha Leads,” we see this manifest in conflict with her daughter Ellen, who, according to the author, was “overwhelmed by self-doubt” and, “to Martha’s dismay,” was “more interested in her succession of suitors than in her studies.” How does Martha’s career as an activist seem to affect her daughter’s development? What do you think of Martha’s early reservations about becoming a leader and her own doubts about her capabilities? Do you see this conflict present in modern-day mother-daughter relationships?

12. Discuss the interplay of women’s rights and anti-slavery activism throughout the book. The abolitionist and women’s rights movement were aligned through much of the mid-nineteenth century. The movement split in the late 1860s over priorities—some women insisting that the fight for Black male suffrage take precedence over the fight for women’s rights, while Elizabeth Cady Stanton and Susan B. Anthony broke away to fight solely for the women’s vote. In what ways have the conflicts of this period extended to our own?

13. Think about the husbands of Martha, Frances, and Harriet. How did they help or hinder their wives in their sociopolitical goals? What impact did these relationships have on the women in their decision-making processes? How did the women shape the thinking and actions of their husbands?

14. Reflect on the Henry’s long anti-slavery career, the battle between Frances and Henry in the early 1860s about immediate emancipation, and the ultimate assassination attempt on Henry and two of their sons. Martha blames Henry for Frances’s unhappiness and, the author writes, finds him “hungrier for power than for principle.” What is your final assessment of Henry and of the difficulties of their marriage?

15. Letters, photos, and portraits appear throughout the book as chapter and section openers. What do these add to your reading experience? How does it feel to have faces and handwriting to put to these historical figures?

16. Consider the impact that the actions of the activists in the book may have had directly on your own life. Can you conjure an example of how their efforts in the movements benefited you personally?

1. Check the National Register of Historic Places for historical sites near you. See what you can learn about your local history!

2. Correspond with your friends through handwritten letters about the book. This way, you might get a sense of what it was like to hold passionate discussions through snail mail as the women in the text did.

3. Brainstorm ways you might contribute to social activism today. Research causes that you are passionate about and take inspiration from Martha, Frances, and Harriet. Is there a local group you can participate in or online resources available in your area?