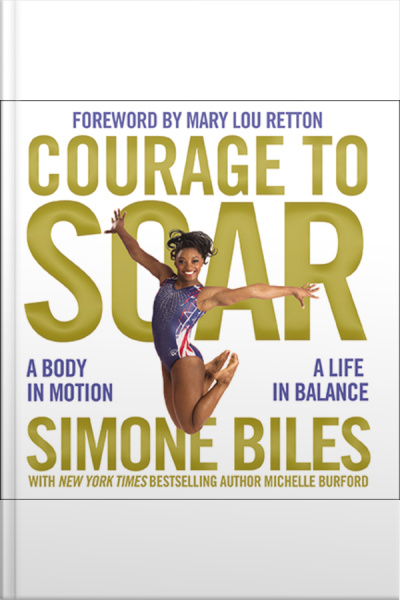 Courage To Soar: A Body In Motion, A Life In Balance

Nineteen-year-old Biles, Olympic gold medalist and the most decorated U.S. gymnast of all time, takes readers along her journey to the podium in this memoir. After spending her early childhood in and out of foster care, Biles was adopted by her biological grandparents. She began her gymnastics training at the age of six after a field trip to Bannon’s Gymnastix, where the coaches quickly discovered that she “had what it took to go all the way.” Biles describes not only her gymnastics training and career but also her personal life, including her grandmother’s death, the difficult decisions she made in order to balance school and gymnastics, her “bratty period” in her early teens, and her love for her car, with its zebra-print interior. In recent years, Biles has won three consecutive world championship titles followed by her team gold and individual wins at the 2016 Olympics. Biles’s narration is effervescent, showing her to be, as her brother says, “a goofy and down-to-earth kid.” The tone is conversational and includes casual phrases such as “if you can’t already tell” and “just kidding.” She expresses appreciation for her family, friends, teammates, and coaches and frequently credits God and her faith for her success. One slight caveat: readers without background knowledge about gymnastics may not find the terminology to be adequately explained. VERDICT Essential for libraries serving tween and teen gymnastics fans.–Magdalena Teske, Naperville Public Library, IL