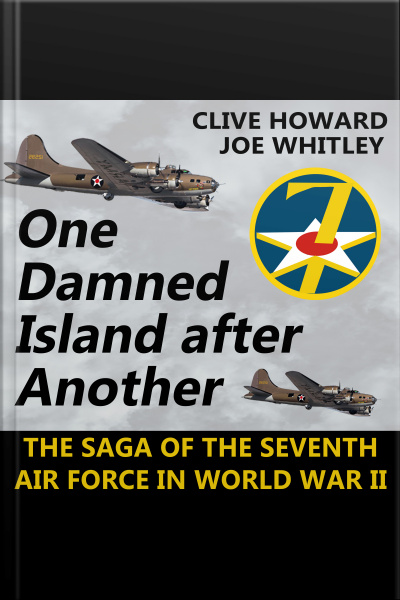 One Damned Island After Another: The Saga Of The Seventh

On 19th October 1940, the Hawaiian Air Force, later known as the Seventh Air Force, was established to provide air defense of the Hawaiian Island and to engage with threats in the Pacific.
Just over a year later the Japanese attack on Pearl Harbor devastated this force. Out of a total of 231 aircraft of the Hawaiian Air Force, 64 were destroyed and not more than 79 were left usable. Out of the inferno emerged the newly reformed Seventh Air Force.
It faced, in the central Pacific, the largest water theater in the world - 16,000,000 square miles, five times the size of the United States.
The Americans patched up their planes as best they could and began to fly the "A toll Circuit," the low-lying, white sand atolls and the first stepping stones on the long road to Tokyo.
In this huge area and against a fearsome opponent, the men of the Seventh were forced to fly the longest missions in any theater of war, entirely over water and, at first, without fighter escort.
They fought at Midway, Guadalcanal, Tarawa, Kwajalein, Eniwetok, Truk, Palau, the Philippines, Iwo Jima, and finally Tokyo.
Clive Howard and Joe Whitley's history of this remarkable air force covers from the events at Pearl Harbor through to V-J Day, covering every single island that the force landed on in between.
They listened to demand of Corporal Earl Nelson's article Heroes Don't Win Wars, that criticized the press and radio that only recorded the fantastic achievements of men who wore medals; Why don't they talk about the guy who is just a soldier?
So with humor and insight Howard and Whitley and provided us with a history of the Seventh Air Force that doesn't focus on only the glorious achievements of some men, nor does it simply record the accounts of the "brass hats", but instead gets to the heart of what the men of this extraordinary force did and thought.
Clive Howard and Joe Whitley were both sergeants and served as correspondents for the Seventh Air Force. They were there; they saw it happen.