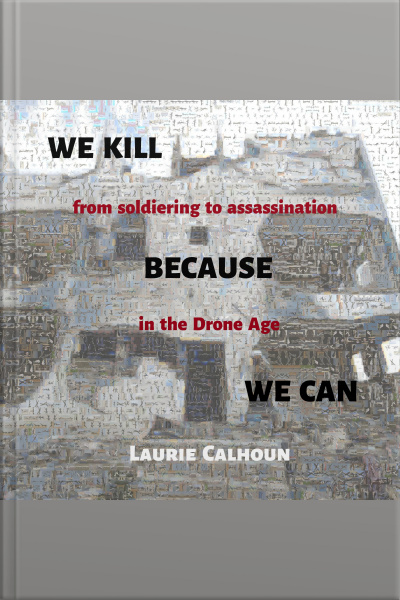 "Last resort has become first resort. Courage has become cowardice. Black ops have become standard operating procedure. An intelligence agency is now a killing machine. Self defense has become naked aggression. Guilt beyond a reasonable doubt has become possible future potential for guilt. Voices of dissent have been irrevocably silenced. Patriots have been replaced by mercenaries. Human rights have been eclipsed by concern with the protection of soldiers’ lives. The U.S. war on terrorism has been carried out using terrorist tactics, with formal military states emulating asymmetrical factional killers. Wars of necessity have been supplanted by ever-proliferating wars of choice."

In We Kill Because We Can: From Soldiering to Assassination in the Drone Age, Laurie Calhoun examines the twenty-first-century practice of remote-control killing of suspects located in Third World countries and challenges readers to reflect upon the long-range implications—moral, political, psychological and cultural—of this new form of “warfare”. Through the use of provocative analogies and examples, We Kill Because We Can clarifies and criticizes targeted killing as incompatible with the values and principles of modern Western democratic societies.

An audiobook pdf supplement containing all references and notes is available for free download at:

Praise for We Kill Because We Can:

“a robustly argued and disturbing work. . . has exposed the ethical and moral bankruptcy and shortsighted objectives of the Predator drone programme.”

¨provides an eclectic and even engrossing cultural, ethical, legal, and philosophical potpourri...¨

"This is a dense, detailed, and relentless chronicle of the dismal consequences and...minimal benefits of targeted killing; opponents of drone warfare will find plenty to bolster their arguments."

“A fresh, well-researched and well-written book...”

“Calhoun's criticism of targeted killing is relentless, and this position certainly needs to be heard.”

¨a powerful book which subjects drone warfare to moral scrutiny and cannot but expose the lies and hypocrisy of the US.¨

"This chilling and comprehensive survey more than amply demonstrates that drone strikes are war crimes..."

"Calhoun's brilliant enquiry into the mindset of its perpetrators and supporters is a chilling reminder of how far we have strayed from the concept of 'a just war.'"

"A comprehensive and shocking survey of the dirty consequences of US drone strikes. This important work will be helpful in any re-examination of drone policy."

Medea Benjamin, cofounder of CODEPINK for Peace and author of Drone Warfare:

"a clarion call to reverse course if we ever want to see an end to our military adventures abroad and ...